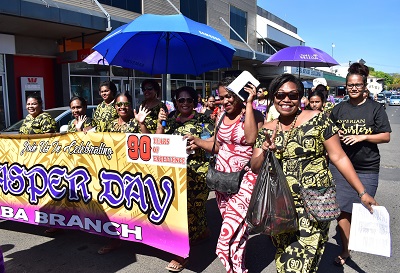 WOMEN from all walks of life tied to Jasper Williams Primary School gathered at the Churchill Park Stadium in Lautoka yesterday to celebrate the 90th anniversary of the oldest all-girls school in the Western Division.

Current and former students were joined by family, friends and well-wishers to mark the special occasion which began with a march through Lautoka City.

Dressed in their best sulu jaba, the women remembered the origins of the school which began in 1929 by Wesleyan missionaries to provide education for Indian girls.

Chief guest, University of Fiji lecturer Professor Salome Rokuta said the occasion was one to reflect on the journey that the school and its students had gone through over the past 90 years.

“We are thankful for Mr Jasper Williams who bought the hotel up on a hill which became an orphanage and then later Jasper Primary School,” she said.

“Our lot had the privilege of having the first principal of Jasper Williams High School who was Ms Griffith.

Then Miss Margarie Hodge took over and she was the longest serving principal of Jasper High School.

Ms Hodge is a family name. She was a part of our school from 1960 to 1994 before finally retiring and Mrs Artack took over.

“We are sad that she couldn’t be here to witness the fruits of her labour.”

She said the teachings from the school were carried by every student that attended Jasper Williams.

“Our biggest resource was that we were spiritually blessed every morning with devotion and school assemblies that taught us the Word of God.

“Most former students are not only academically excellent but they also excelled spiritually. That was the greatest thing that we took away with us when we left Jasper.

“The teachings that we received was far superior to anything else that we were taught.”

She said each Jasper Williams student should be proud of the achievements of the school over the past 90 years.

A soli was also held during the occasion to raise money for upgrade works at the Jasper Williams High.