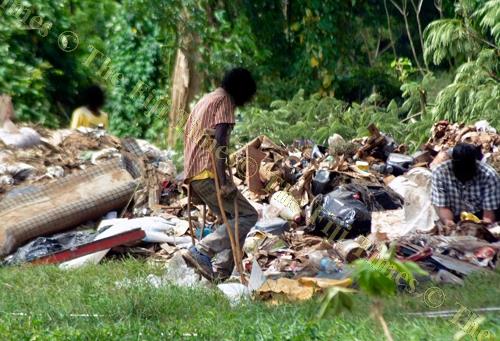 Scavengers in search of items in Ba. picture: BALJEET SINGH

A team from this newspaper witnessed a group of people picking through discarded furniture, clothes and other household items at a dump site near the Ba River yesterday. As quickly as trucks emptied soiled items at the site, scavengers swarmed through the dump.

When queried about the scavenger activity, Ba Town Council CEO Dip Narayan said people were not allowed to remove items because of the health and safety risks involved.

“We have different areas around Ba where temporary dump sites are located,” Mr Narayan said.

“The one near the Ba River is a temporary site; this is where we dump spoiled items before they are taken to the landfill.

“People are not allowed to take things out of the site.”

Mr Narayan said all dumped rubbish would be collected by the council and transported to the Vunato Dump in Lautoka.

Apart from the scavenger issue, looters also took advantage of the Sunday floods. While the town was under heavy police guard over the Easter weekend, thieves wreaked havoc in other parts of Ba.

Residents in Yalalevu said people took advantage of the floods to steal goods and destroy property.

Rashia Nisha, a resident, said a rental car parked near her home had its windows smashed by looters.

“We saw them moving around looking into homes that were empty so we couldn’t leave our house,” she said.

“Even though we were swimming in waist-deep floodwater inside the house, we couldn’t leave because of the looters.”