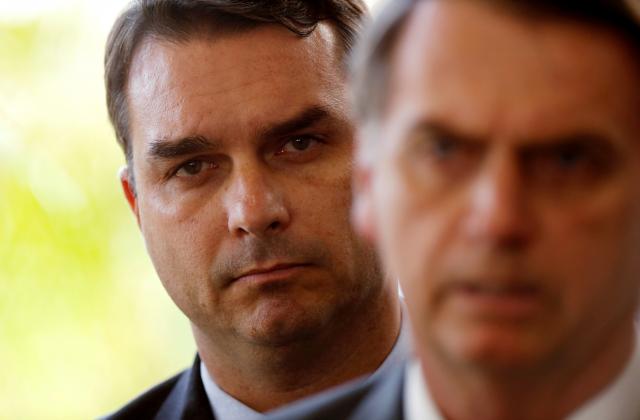 RIO DE JANEIRO (Reuters) – A lingering financial scandal involving Brazilian President-elect Jair Bolsonaro’s son has soured his inauguration next week and tarnished the reputation of a far-right maverick who surged to victory on a vow to end years of political horsetrading.

Bolsonaro, who spent nearly 30 years in Congress, takes office on Jan. 1 after an electoral win that gave him a mandate to hobble violent drug gangs, cut through red tape to kick-start Brazil’s economy and go after the corrupt political class.

But a regulator’s questions about a bank account of the former driver of his son, Rio de Janeiro state lawmaker and Senator-elect Flavio Bolsonaro, has clouded his big day, leading critics to doubt the president-elect’s graft-busting credentials and his ability to deliver a new type of politics.

“Ever since this case came to light, there has been a spectacle of evasions and unconvincing explanations on the part of the Bolsonaros … (about) an episode with relevant implications for national politics,” Brazil’s biggest newspaper Folha de S.Paulo said in an editorial on Thursday.

The scandal arose after Brazil’s Council for Financial Activities Control (COAF) identified 1.2 million reais ($305,033) that in 2016-17 flowed through the bank account of Queiroz, who for years was on Flavio Bolsonaro’s payroll as a driver and adviser. Some payments were made to the president-elect’s wife, Michelle Bolsonaro.

Rio state prosecutors said in a statement on Thursday that Queiroz’s lawyers told them he was willing to cooperate with investigators, but also handed over documents from a doctor indicating that he had to undergo an urgent surgery.

On Wednesday, Queiroz sought to explain himself in an interview with a Bolsonaro-friendly TV network.

After citing a health crisis as his reason for failing to attend two previous appointments with prosecutors to explain the provenance of the money, Queiroz said in the SBT network interview that money in his account was from a side-business of buying and selling cars.

Queiroz’s legal team did not clarify why he agreed to the TV interview instead of talking directly with prosecutors. The investigators also said they want to question Flavio Bolsonaro on Jan. 10.

Jair Bolsonaro has said the payment to his wife was Queiroz repaying a personal loan. He added that if he made a mistake by not declaring the money from Queiroz, he would rectify it with tax authorities.

Flavio Bolsonaro, who has now been called by investigators to explain the money after his former driver’s no-show last week, has said that Queiroz gave him a “plausible” explanation, and that the accusations were intended to destabilize the Bolsonaro family.

In the interview, Queiroz said the money to Michelle Bolsonaro had been explained by her husband, and was to repay a loan. He denied he had been dodging investigators, and said he had failed to turn up to appointments with prosecutors because of a malignant cancer that requires immediate surgical removal.

Michelle Bolsonaro has not commented publicly on the case.

According to the COAF, some of the payments to Queiroz’ bank account were made by other employees on Flavio Bolsonaro’s payroll when he served as a Rio de Janeiro state lawmaker, including by Queiroz’s own daughter. Many of the deposits were made on or around the same day that the state Congress paid employees, the COAF found.

It passed on the suspicious financial flows in Queiroz’s account to Rio state prosecutors, who have so far failed to get the former driver to come in and explain the funds.

Queiroz declined to explain why his colleagues were depositing money into his account, saying he would tell investigators.