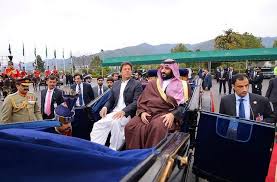 ISLAMABAD (Reuters) – The lavish welcome for visiting Saudi Crown Prince Mohammed bin Salman in Islamabad this weekend could hardly have made more clear Pakistan’s dependence on foreign investments to prop up its stumbling economy and plug its depleted reserves.

Fighter jets escorted the prince’s plane across Pakistani airspace and television stations devoted hours of live coverage to the royal motorcade and ceremony, where officials signed memoranda of understanding in energy, minerals and agriculture valued at about $20 billion.

With foreign exchange reserves now only enough to cover two months of imports and an economy dogged by weaker growth and rising debt, Pakistan needs investment badly as bailout talks with the International Monetary Fund are moving slowly.

President Arif Alvi bestowed Pakistan’s highest award, the “Nishan-e-Pakistan”, on the prince, while the head of the Senate presented him with a gift of a gold-plated submachine gun.

“The MOUs reflected the enhanced relationship but what I feel is that this is just a beginning,” Prime Minister Imran Khan told his guest.

For Saudi Arabia, itself in need of friends after prompting global outrage over the killing of journalist Jamal Khashoggi last year at its consulate in Istanbul, the fulsome tributes were no doubt welcome but officials said the accords were economically significant. Riyadh denies the prince was involved in Khashoggi’s killing, which has strained ties with the West.

“This is not charity, this is an investment. There is benefit for both sides,” said Saudi Minister of State for Foreign Affairs Adel al-Jubeir.

Under its Vision 2030 strategy, Saudi Arabia is looking to diversify investments in addition to its crude oil reserves and develop as a “global investment powerhouse”.

The largest deal signed on Sunday, a $10 billion refinery to be developed in the port of Gwadar by Saudi Aramco, will take up to five years to develop. But smaller deals, including the acquisition of two liquefied natural gas plants, alternative energy projects and food and agriculture investments should bear fruit more quickly.

“We believe in Pakistan’s future, we believe Pakistan has a huge opportunity,” Prince Mohammed said on Monday.

Details on many of the investments remain vague but the package was the largest since the $60 billion China Pakistan Economic Corridor, hailed as the centerpiece of Beijing’s mammoth Belt and Road global infrastructure project when it was announced in 2014.

“The interesting thing about this trip is that the relationship has taken another dimension. From strategic military-to-military, it has taken the dimension of economic cooperation,” said Zahid Hussain, a writer and analyst on regional issues.

“China will remain a major, key partner in Pakistan,” he said. “But the Saudis will be supplementing that. I don’t think it’s a zero-sum game.”

Prince Mohammed’s visit coincides with a ratcheting up of tensions between Pakistan and India following last week’s suicide attack in Kashmir, claimed by the Pakistan-based Jaish-e Mohammad, which killed 44 Indian police.

The issue was only briefly alluded to in public but Prince Mohammed’s next stop on his first official Asian tour is New Delhi, where officials are also eyeing billions of dollars in investments.

Iran – Saudi Arabia’s arch foe – has also stepped up pressure on Pakistan over an attack near their shared border claimed by another militant group, Jaish-e Adl.

While Pakistan’s powerful military has long been a reliable ally of Saudi Arabia, Islamabad is wary about being drawn into the war in Yemen, where a Saudi-led coalition is battling the Iran-aligned Houthi movement. Pakistani officials say the investment package is not linked to support for the coalition.