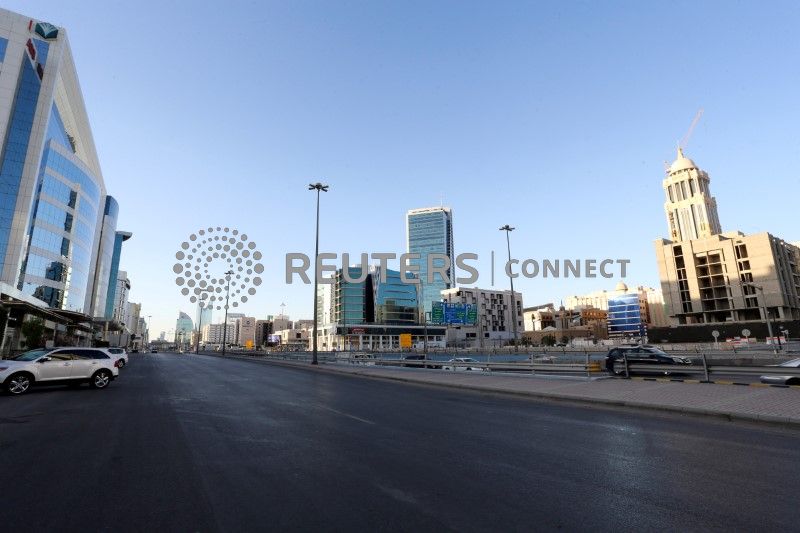 FILE PHOTO: A general view shows an empty street after a curfew was imposed to prevent the spread of the coronavirus disease (COVID-19), in Riyadh, Saudi Arabia, March 23, 2020. REUTERS/Ahmed Yosri

RIYADH/DUBAI (Reuters) – Saudi Arabia reported its second coronavirus death and tightened a nationwide curfew, barring entry to and exit from the capital Riyadh and the holy cities of Mecca and Medina as well as movement between all provinces from Wednesday.

The orders, approved by King Salman and published by state media, also brought forward the start of curfew in the three cities to 3pm from 7pm starting on Thursday.

Saudi Arabia introduced the 21-day curfew on Monday after registering a jump in infections. Its second fatality was a 46-year-old foreign resident in Mecca, among 133 new cases taking the total to 900.

Across the six-nation Gulf Cooperation Council the tally rose to 2,472 with seven deaths, as the United Arab Emirates registered 85 new infections, Oman 15 and Kuwait four.

In the UAE, the region’s tourism, business and transit hub, hundreds of Europeans were stranded after airports halted passenger flights earlier than expected.

Oil engineer Jamie Richardson had been due to return to Britain on Wednesday for a new job, but late on Tuesday, Dubai and Abu Dhabi airports announced flights would stop that night. “It’s proper stressful. You have no idea what is going on,” he said.

Saudi Arabia has taken rigorous steps to contain the outbreak, also including halting international flights as well as suspending the Umrah year-round pilgrimage and closing mosques, schools, malls and restaurants.

The curfew and other restrictions have altered the rhythm of daily life in the country of some 30 million, many of whom enjoy late-night gatherings at coffee shops or private homes.

Turkish resident Nasif Erisik, who plays cards most nights with friends at one of their homes, said the group has resorted to online gaming to keep in touch: “Corona has…changed our habits and everything in our lives.”

The authorities say they will fine or jail curfew-breakers and those encouraging violations. An Interior Ministry spokesman on Wednesday reported high compliance so far.

Dubai directed private sector companies to implement remote working systems for 80% of staff from now until April 9, the authority regulating business in the emirate, Dubai Economy, said on Twitter on Wednesday. Pharmacies, grocery stores, supermarkets and cooperative societies were excluded from the order.

UAE authorities have urged people to stay home but not announced an official curfew or suspended work. On Wednesday, they directed food retail outlets to remain open 24 hours a day but not exceed 30% capacity to ensure physical distance of 2 meters (6 ft) between shoppers.

Organisers of the Expo 2020 Dubai world fair, scheduled to start in October and estimated to draw 11 million overseas visitors, confirmed one coronavirus case among staff and said they were reviewing plans and preparations.