Saudi minister says whatever the Palestinians accept, everyone else will accept 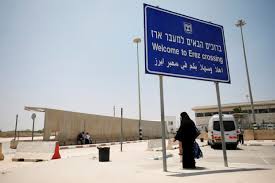 A Palestinian woman stands beneath a sign at the Israeli side of Erez crossing, on the border with Gaza June 23, 2019. REUTERS/Amir Cohen

RIYADH (Reuters) – A Saudi minister said on Sunday that improving the Palestinians’ situation should be welcomed but that addressing the political process in resolving the conflict with Israel is “extremely important”.

Minister of State for Foreign Affairs Adel Jubeir was responding to questions from broadcaster France 24 about U.S. proposals for economic development as part of the Middle East peace process.

“I think anything that improves the situation of the Palestinian people is something that should be welcomed. Now having said that the political process is extremely important,” he said in an interview.

“The Palestinians are the ones who have the ultimate decision in this, because it’s their issue and so whatever the Palestinians accept I believe everybody else will accept,” he added.

Jubeir said Riyadh continued to support a political process based on an independent Palestinian state along the 1967 borders with East Jerusalem as its capital.