Saudi foreign minister: Attacks on Gulf oil facilities must be addressed with ‘firmness’ 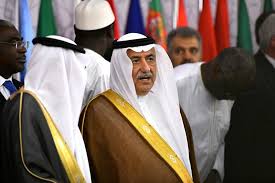 JEDDAH, Saudi Arabia (Reuters) – Saudi Arabia’s foreign minister said on Wednesday that attacks on Gulf oil facilities must be addressed with “strength and firmness” and that more efforts were needed to combat the activities of the groups that carried them out.

“We emphasize the need to exert more efforts to combat the subversive activities of extremist and terrorist groups,” Ibrahim al-Assaf told a meeting of foreign ministers ahead of emergency summits of Gulf and Arab leaders to discuss the attacks.

“They must be addressed with all strength and firmness,” he said. He was referring to an attack on oil tankers off the United Arab Emirates this month and drone strikes two days later on oil pumping stations in Saudi Arabia.

Riyadh has accused Tehran of ordering the drone strikes on its oil assets. Tehran has denied involvement in either attack.