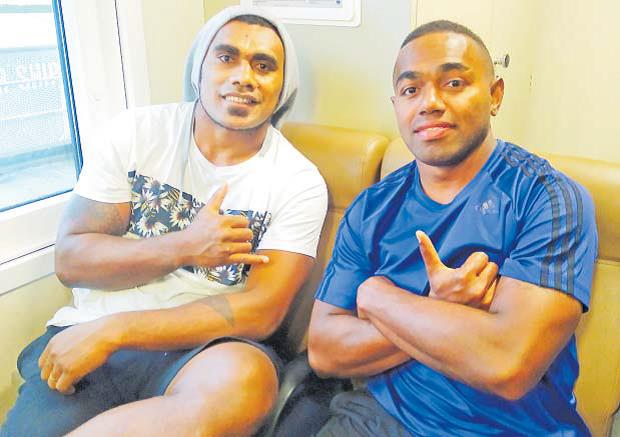 Eroni Sau, left, and Waisea Nacuqu will be playing at the Radradra 7s on Taveuni. Picture: JONA KONATACI

THE Sledgehammer Eroni Sau and sensational Waisea Nacuqu are keen to be part of the inaugural Radradra 7s tournament on Taveuni that will kick off tomorrow.

The two top sevens players were invited by France based Flying Fijian Semi Radradra to be part of the tournament as guest players in one of the local-based teams.

Sau plays for Perpignan in the Top 14 competition this season and plans to support Radradra on his quest of developing grassroots rugby back in his home island on Taveuni.

Sau said giving back to his nation was part of his mission and the Radradra 7s was a good place to begin.

“Fiji will always be at heart and I have a lot to give back to the nation for all their support through the years and where I am now and I believe to be part of the tournament will be an impact to the grassroots level,” said Sau.

“This is also an opportunity to inspire the young rugby players in the island and the upcoming talents that will be part of the tournament.”

Meanwhile Nacuqu hopes to inspire island rugby and be an inspiration to the players and children that will be part of the tournament.

“It’s all about developing the sport that we love as Fijians and I hope our participation will boost the morale of the other players to strive for excellence and be the best and be recognised by the national selectors,” said Nacuqu.

The three-day tournament begins tomorrow at Welagi ground on Taveuni and the final will be played on Friday.

Some of the renowned players that will be present at the Radradra 7s are Semi Kunatani, Eroni Sau, Waisea Nacuqu, Eto Nabuli and Terio Tamani to name a few.