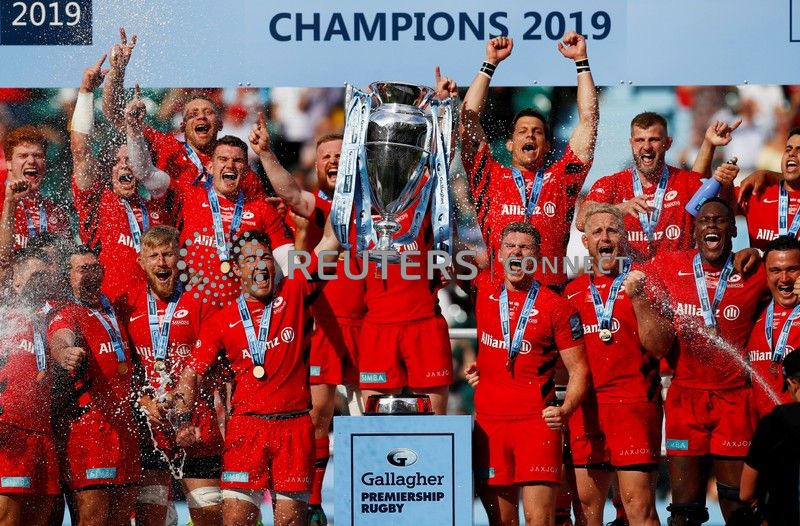 (Reuters) – English champions Saracens have been given a 35-point deduction and fined £5.36 million after they were found guilty of breaching salary cap regulations, Premiership Rugby (PRL) said on Tuesday.

“Saracens Rugby Club failed to disclose payments to players in each of the seasons 2016-17, 2017-18 and 2018-19,” Premiership Rugby said in a statement https://www.premiershiprugby.com/news/premiership-rugby-statement-decision-on-salary-cap-charges.

“In addition, the club is found to have exceeded the ceiling for payments to senior players in each of the three seasons.

“The Salary Cap Regulations stipulate that a points deduction may be imposed in the current season (2019-20) only. The sanction has no bearing on any other domestic or European competition.”

Saracens said they were “shocked and disappointed” by the sanctions and confirmed they would appeal the disciplinary panel’s findings.

“The club is pleased the panel acknowledged it did not deliberately attempt to breach the salary cap and steadfastly maintains that player co-investments do not constitute salary under the regulations,” the club said in a statement https://www.saracens.com/club-statement-salary-cap.

“This view is supported by independent legal and professional experts. The club will continue to vigorously defend this position especially as PRL precedent already exists whereby co-investments have not been deemed part of salary in the regulations.”

The club also stated the panel’s interpretation of the regulations were “detrimental to player welfare” in the league.

Saracens, who accomplished the Premiership and European double last season, were fourth in the standings this season with nine points from three games before the punishment was announced.

The points deduction will place them last in the standings on -26 ahead of Saturday’s trip to Gloucester and in danger of relegation from the top flight if they end the season at the bottom of the table.

The club will be allowed to seek a review and if they do, the sanctions will be suspended pending the review’s outcome.

The Premiership Rugby salary cap regulations were introduced in 1999 to ensure the financial viability of clubs in the league and also provide a level playing field.

The current salary cap is £7 million pounds, which does not include two ‘Excluded Players’ whose salaries are outside the cap.