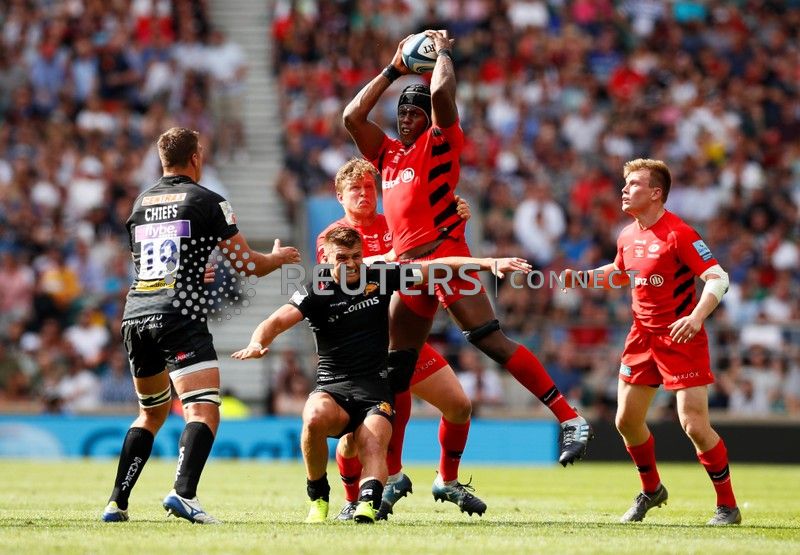 LONDON (Reuters) – Relentless Saracens dug deep to beat a spirited Exeter 37-34 on Saturday and clinch their fourth Premiership title in five years, while also completing a second double after they won the European Cup three weeks ago.

Saracens fell behind to a try after 27 seconds and trailed 27-16 early in the second half but, just as they did in their semi-final comeback against Leinster, backed themselves to come through and eventually proved too strong.

England hooker Jamie George settled the issue with his second try three minutes from time as the London club underlined their status as the greatest club side in Europe.

“At 27-16 most teams are crushed – you’re tired, it’s hot, you’re not playing but somehow this group found a way to rally themselves physically and emotionally,” said Saracens coach Mark McCall after the highest-scoring Premiership final.

“And once we went three points up I thought we played brilliant pressure rugby and it was a masterclass in how to close out a game. This is our seventh consecutive win in a final and for a large part of it it’s the worst we’ve played – but it’s also one of the most satisfying.”

Exeter, appearing in their fourth consecutive final, were in the game for long periods and were dreaming of victory early in the second half but have now lost three of those four to Saracens.

The Devon side got off to a dream start as Saracens failed to cleanly collect the kickoff and scrumhalf Nic White scooped up the loose ball to score with 27 seconds on the clock – the fastest try in a Premiership final.

Saracens roared back though, with tries by George and Ben Spencer as Exeter had Henry Slade sin-binned.

Anyone thinking the outsiders would drop their heads, however, do not know Exeter, who finished top of the regular season standings. They re-grouped and pounded the Saracens line and, after another yellow card for Itoje, shoved Dave Ewers over.

Saracens, so used to being in control of the big games, could not get a foothold and it was the Chiefs who struck again as lock Jonny Hill forced his way through. Joe Simmonds then slotted an easy penalty to give Exeter a 22-16 halftime lead.

They extended it with a try that made a mockery of criticism that they are a one-dimensional team as a great break led to Sam Skinner blasting through, then deftly off-loading for Slade to score.

That gave Exeter side an 11-point lead but before they had a chance to enjoy it, Saracens struck back as Liam Williams soared to collect an Owen Farrell kick and score in the corner, Farrell converting to make it a four-point game heading into the final quarter.

The England flyhalf then drilled a kick right into the corner to keep the pressure on. Itoje stole the lineout and George bundled over to settle it.

Exeter showed great spirit to come again and score through Sam Hill but it was too late as the Saracens party had already started.

Exeter coach Rob Baxter was hugely encouraged by his team’s display, which he said showed how far they had come in the last 12 months.

“We’ve stepped forward considerably from last year’s final and now I need to convince these players that if you can take the European champions that close and, if we continue the rate of improvement, then we should be back here challenging next year,” he said.

“There’s nothing else for us to talk about – after losing three of four finals, we have to find a way to power through our European group and there was nothing in that game that told me we couldn’t go toe to toe with Saracens.”

Asked how the double winners could be beaten, Baxter said his team had shown the way for an hour. “But then it showed that if you go cagey and try to manage it then they can maybe out-manage us,” he said. “But overall it was a game where the lads should feel very proud of how close they came to beating them.”