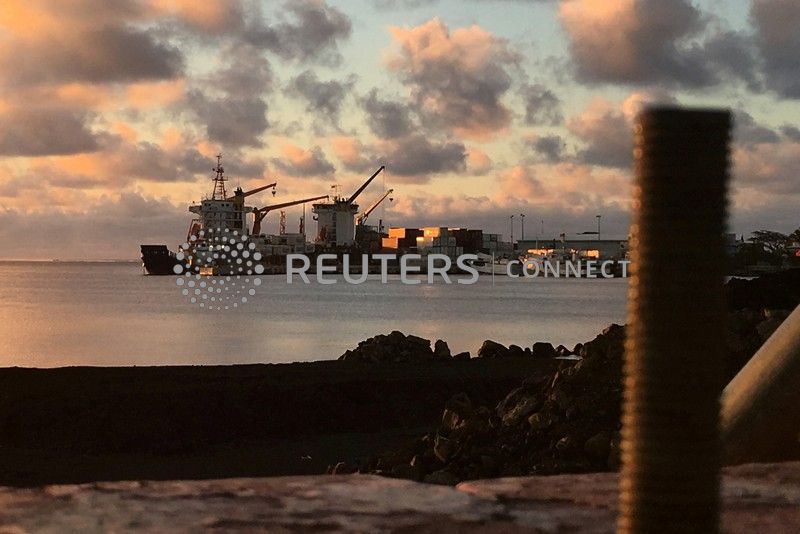 FILE PHOTO: A container ship unloads at the Matautu port, which has been expanded through support from Japan, in the Samoan capital of Apia, July 12, 2019. REUTERS/Jonathan Barrett

SYDNEY (Reuters) – Samoa’s disputed leader is promising to build a port with Chinese help for $100 million, about a third of the cost proposed earlier, said sources with knowledge of the situation, as he bids to stay in power despite losing a parliamentary majority in a tight election.

The Asian Development Bank (ADB) deemed that the port project at Vaiusu, west of the capital Apia, was not economically viable after estimating it would cost more than $300 million, three sources told Reuters.

Tuilaepa, a long-term ally of China, said the new port would create much-needed jobs and boost trade and tourism, while overcoming weaknesses at the main port in Apia, which is vulnerable to ocean swell.

Opposition leader Fiame Naomi Mataafa, who was sworn-in as prime minister at an ad-hoc ceremony in May, told Reuters she would shelve the port development, calling it excessive for a small country already heavily indebted to China.

China has in recent years become a more assertive competitor for influence in the Pacific with the United States and its allies, which are wary of Chinese-backed infrastructure projects that could support military activity in hostile times in the strategic waters.

Tuilaepa has not disclosed what financing arrangements have been discussed with China and which contractors may be involved. A spokesperson for Tuilaepa did not respond to questions.

The ADB said in a statement to Reuters that it found in a 2015 study that the Vaiusu plan was “not economically and financially viable”.

It instead recommended upgrading the existing Apia port, where work has been done with aid from Japan.

The ADB declined to disclose costing data for the Vaiusu option.

Three sources with direct knowledge of the ADB study, including one diplomatic official, told Reuters the Vaiusu project was projected to cost more than $300 million, raising concern it could tip Samoa into unsustainable debt should it go ahead.

One of the sources said Samoa had sought help from China after the ADB declined to support the project.

The China-backed plan has a different wharf location, which reduces the amount of dredging required, compared with the ADB plan, thereby lowering costs. But one of the sources said it was not clear how the new projected price could be reduced by two-thirds.

The Vaiusu port would cater for container vessels, cruise ships and shipping fleets, and is in the final stages of negotiation with China with work set to begin when coronavirus restrictions on international borders are lifted, according to a January report in the Samoa Observer, citing Tuilaepa.

China’s foreign ministry said in a statement to Reuters on Wednesday that China is exploring the feasibility of building the Vaiusu port at the request of Samoa.

“The cooperation is based on mutual respect and equal consultation, and the purpose is to improve Samoa’s infrastructure, promote local economic development and create jobs,” the statement said.

China’s foreign ministry has previously said any help would come “without any political strings”.

China is the single largest creditor in Samoa, a country of 200,000 people, accounting for about 40%, or some $160 million, of its external debts.

Samoa, meanwhile, has been at a political impasse since its April election.

While a series of judicial rulings back Fiame’s claim to be prime minister, Tuilaepa retains the support of the head of state, who has suspended parliamentary hearings and frustrated plans to confirm a new government.

The United Nations has urged Samoa’s leaders to resolve the crisis through dialogue.