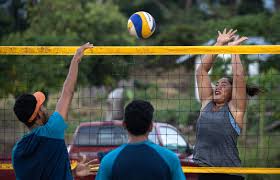 Coach of the squad, Aaron Alsop, said the Arafura Games 2019 is a international multi-sport event that has attracted participants from the Asia-Pacific region and beyond.

“This tournament is a great leading game to help us prepare against other international teams and also give the players international exposure which they have not had.

“Obviously the Pacific Games is coming up in July, and Samoa as a host country comes high expectation about the teams’ performances and so this is part of our preparations to the Games.

“We have selected two men’s pairs and one women’s pair that will be leaving for Australia and it will also be an opportunity for final selection,” he said, in an interview yesterday with Samoa Observer.

Mr. Alsop added that the final team for the Pacific Games will be two players from men and women who will be selected by the Samoa Volleyball Federation.

“The commitment from players have been excellent, they train four times a week plus games on Saturday plus gym sessions a week.

“We have some big countries from Asia as well as the rest of the Pacific together with Australia competing so it will be a very tough tournament.

“We are not very worried about winning medals at the event because it’s not a tournament that means anything in that respect – we see this as a chance to play against teams we don’t normally play against,” he added.

A major challenge facing beach volleyball is the perception that it is a “grassroots sport”, and consequently does not receive support. But Mr. Alsop said this has not stopped the national beach volleyball squad from going ahead with their own preparations.

“I think that because it is seen as a typical grassroots or village sport, it does not get the support that some of the big sports receive in terms of sponsorship. Other sports have been given the opportunities to go to China to prepare, but we are training back home which is a challenging environment for the players.”

He said they have been able to obtain support from a number of foreign donors and the Samoa Association of Sports and National Olympic Committee (SASNOC).

“We managed to obtain sponsorship from overseas like the Australian government and the Arafura Games, no sponsors locally to help us get there. Samoa Association of Sports and National Olympic Committee (SASNOC) gave us the support of $4,000 (US$1, 520) for a whole annual programme, which does not cover a lot of the costs of what we are operating on.

“But we are lucky to get support from people like Scientific Research Organisation of Samoa (SROS) to train in their headquarters. We have a test event on 31st of May where they will use the main venues for a trial run,” he added.

The Samoan squad is scheduled to leave the country this Sunday to play in the 2019 Arafura Games in Australia’s Northern Territory.