Samoa measles: ‘the children are deteriorating in front of our eyes’ 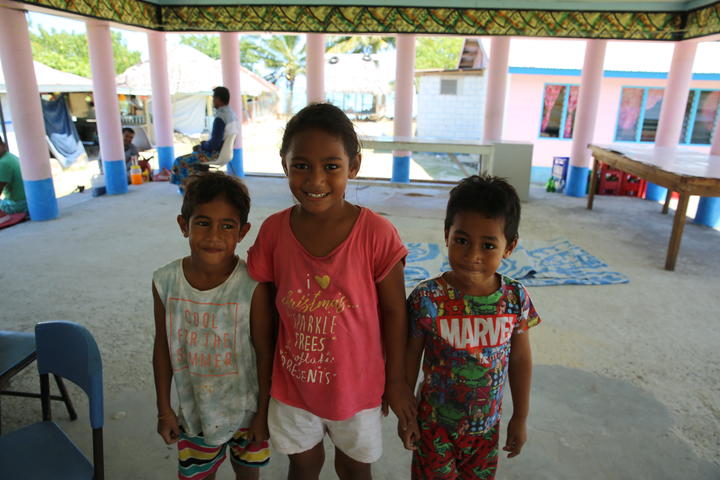 The children of Manono Village where one 18-month-old child has died of measles. Photo: RNZ / Alex Perrottet

“I took them to the hospital, the vaccine is very important.”

School teacher Fa’i Fruean was taking no risks with his two daughters after the death of a 15-month-old with measles in his village near Apia this week.

“Measles is the virus inside our body and the vaccine is the key to protect,” he said.

Being a school teacher, education is important to him. Half way down the main road towards town is Leulumoega District Hospital, where there is a quiet lunch time lull, and Dr Scott Wilson is expecting a busy afternoon.

He said there are 18 sick children in the ward, some in a very serious situation – he had to send one child to the main hospital in town as he could do no more to help.

“The children are deteriorating in front of our eyes,” he said.

The doctors and nurses are also tired and ready for a break. They will head back this weekend while backup arrives, following the foreign minister’s announcement that 100,000 new vaccines and New Zealand doctors who speak Samoan were on the way.

Dr Wilson was quick to point out that the local Samoan nurses and doctors have been working the hardest, and longest, and have been heroic.

“The amount of work they’ve managed to get through, the support they’ve provided us, they’ve embraced us and helped us, along the journey.”

And it’s not just the doctors. The connected communities around the country have taken the initiative and organised food and parcels and hygiene kits.

The Samoa Victims Support Group, which was established to care for women victims of domestic violence, has volunteers going out every day taking supplies and messages to families.

The messages include the importance of household hygiene, how to care for traumatized children and parents, and of course, why you should get vaccinated.

Every weekday there are mobile vaccination units leaving the Tupua Tamasese Meaole Hospital in Apia following a morning briefing.

The lady with the microphone starts delivering reminders to the volunteers, asking one woman to stand up and turn around as an example to the rest about how to wear a mask properly.

“There is no disease you can spread from under your chin, it’s from your mouth and nose,” she said.

And there were clear instructions about how to treat the families in the village once they arrived.

“Vaccinate the kids, but get parental consent,” she said.

“Make sure there is a parent around. If the parents aren’t there please don’t force yourself on the kids.”

It’s a sensitive topic in the country, with the most at-risk group – six-month to four year olds – not seeing one vaccine all week, despite tens of thousands of people getting the jab.

There are still only 4222 of those children immunised, the same number at least six days ago.

Moli Seia is also a teacher at Manono Uta Primary School. She has three children and they are all immunised.

The school is being rebuilt and she has been teaching students in a beachside fale.

But the tables and chairs are stacked up and not in use – students were sent home for early holidays in a bid to keep them apart. Keeping people apart in Samoa is an ambitious task – every village is united and every family extended.

“Some parents they don’t think deeply about protecting their own kids from the measles,” she said.

“Here in Samoa, some parents are not taking care of their kids.”

“The Ministry of Health is encouraging the people to visit the hospital and there are also the mobile vans.”

The Director General of Health, Leausa Dr Take Naseri, has been sending out daily updates on the mass vaccination programme, but he’s worried about that vulnerable group.

There are still more than 900 of them infected with the disease, and around 200 people sick in hospital.

The death toll from the measles epidemic in Samoa has now climbed to 44, bringing the total number of people infected to more than 3350.