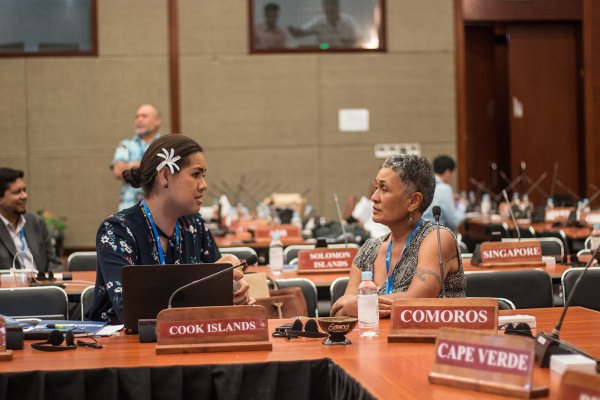 Delegates from the Cook Islands and Comoros speak between sessions at the S.A.M.O.A. Pathway meeting on Monday morning. (Photo: Misiona Simo)

APIA, 30 OCTOBER 2018 (SAMOA OBSERVER) – Delegations from Small Island States and their development partners are gathering in Apia this week to prepare for the SIDS Accelerated Modalities of Action (SAMOA)Pathway report, due late 2019.

Thirty-seven UN member states and 20 non-UN members are meeting in Apia for presentations, discussions and panels on the issues affecting them the most – climate change, oceans, security and more.

Steering Committee on SIDS Partnerships is currently chaired by Belize and Ireland, whose representatives highlighted that partnerships are the way of the future on tackling common issues.

Permanent Representative of Belize to the United Nations, Lois Young, said the criteria for partnerships and how they should work together will be clear and easy to use, and will focus on development in areas that ripple outward.

“Education, for example, will affect health, crime, violence, and more,” Young said at the opening.

Speaking via a prepared video statement, UN Special Envoy for the ocean, Peter Thompson said all the SIDS goals, and especially those relating to reversing climate change are ambitious and require immense teamwork.

“This plan is for all of us to implement and to defend the integrity of the plan,” he said.

“It is impossible without robust, durable partnerships.”

Samoan Minister of Finance, Sili Epa Tuioti said development and adjusting to reforms takes time, and moving forward, Samoa is looking ahead to 2040 to assess where it should get to compared with where it is now.

“What opportunities are there for us and what are we doing today that we should change?” he said.

Sili said he is glad for the opportunity to reflect on the progress towards strong partnerships across the nations.

Sili said Samoa is reaching further than traditional development partners like Australia, New Zealand and the like, but partnering with European nations and similar countries to Samoa.

“Having the Deputy Prime Minister of Romania, Ana Birchall here is positive,” he said.

“There is an opportunity to elevate the discussions to that high political level. When they make a commitment, in my view those commitments will be delivered.”

Among the critical reasons for strong partnerships between SIDS is the increasingly damaging impact of climate change. Sili said he hopes to learn from Caribbean countries from their cyclone experiences, for example.

“[Climate change] will be one of the most serious threats we have to face over time.

It’s something that, depending on the severity, we may need a lot more resources than we currently have access to,” Sili said.

He said discussions on regional or sub-regional climate change facilities are in place, as well as a continuing dialogue with the Asia Development Bank on establishing a disaster relief fund for Samoa.

“We are discussing a resilience fund in the development bank, where we put in money so that when disasters hit we have immediate access to funds,” he said, adding the funds would be in addition to humanitarian relief.

“How do we ensure when a disaster hits that not only do we receive humanitarian help, but that we have sufficient resources to rebuild our infrastructure?

“How do we support the communities that don’t have access to finance to rebuild their homes? Obviously that’s very critical for us,” said Sili.

Liu Zhenmin is in Samoa for the SAMOA Pathway, an inter-regional meeting of Small Island Developing States (SIDS).

He will be working alongside different nations to help support their growing partnerships as they navigate shared challenges.

For  Liu, it was his first time in the Pacific, and he warmly thanked the group for inviting him.

He encouraged them to continue working towards the Sustainable Development Goals, as their target of 2030 draws closer.

“We need to be creative and innovative to our approaches with SIDS support,” he added.

“We have to keep asking, what are the essential needs to SIDS countries?”

FAO Sub Regional Coordinator, Eriko Hibi told Liu that she appreciated his visit to UN Samoa, and it was encouraging for the staff.

“We are not usually top of mind for New York, but your visit today (Monday) has made us feel important,” Hibi said .