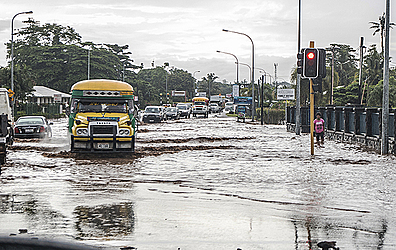 The lessons learned from this experience made Samoa a suitable location to host the fifth Commonwealth Global Biennial Conference on Small States under the theme ‘Building Resilience Through Disaster Risk Reduction’. The conference brought together officials from 23 small states and 20 development agencies to discuss disaster risk financing solutions.

Thirty-one of the world’s 39 small states are from the Commonwealth. These countries are heavily exposed to an increased risk of extreme weather events such as droughts, cyclones, hurricanes, storms and flooding, which can disrupt their economic growth and financial stability.

Disaster risk financing equips small states with the resources required to prepare adequately for – and recovery from – a disaster. This was at the heart of discussions in Samoa and was conveyed through a disaster risk finance training session. Officials learned about financial protection instruments such as cutting-edge insurances and took away tips on how best to warn and evacuate the public.

Samoa’s Minister of Finance, Sili Epa Tuioti, opened the conference saying: “The conference allows us all as small states to reflect on important disaster risk reduction concerns and to take stock of progress towards some of the important frameworks we are party to, namely the SAMOA Pathway and the Sendai Framework for Disaster Risk Reduction.”

The Commonwealth shared its work designed to help small states understand and access finance for disaster preparedness, response and recovery, including:

The Climate Finance Access Hub has helped mobilise £140 million (US$180 million) in climate finance across eight countries who previously struggled to access those funds.

Following the conference, Travis Mitchell, Commonwealth head of economic policy and small states, said: “Even though there is a lot of finance available for small states, the main issue is that the criteria to access those funds is terribly complicated.

“You can imagine with small governments, already pressed for time, capacity and skills, it is really a significant burden for countries to produce the large body of documentation required to access climate finance.”

In response, the hub has deployed national advisors in specific regions to help small states produce the documentation necessary to access funds from facilities such as the Green Climate Fund.

Officials also agreed on the role of the private sector in reducing disaster risk. They expressed the need for new policies to incentivise long-term private sector investments as well as governing frameworks to engage non-governmental organisations and young people for building resilience.