Samoa bow out of World Cup with familiar regrets 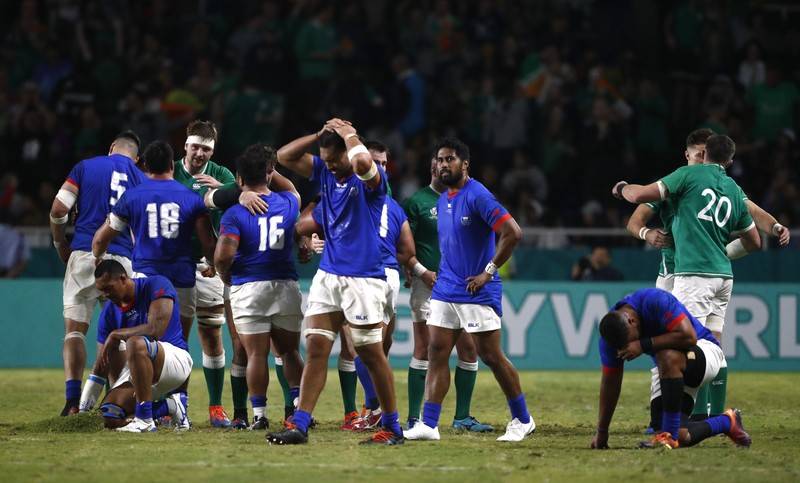 FUKUOKA, Japan (Reuters) – Crippled by administrative chaos and a coaching merry-go-round through the World Cup cycle, Samoa arrived in Japan with an ambitious goal of reaching the knockout rounds.

After a poor campaign in Pool A featuring only one win over emerging nation Russia, they depart with familiar regrets and a host of seemingly intractable problems.

While Pacific neighbours Fiji and Tonga improved as their campaigns went on, Samoa went backwards after beating Russia, losing 38-19 to hosts Japan and bowing out on Saturday with a 47-5 thrashing by an Ireland team with 14 men for most of the match.

With New Zealander Steve Jackson as their third coach in as many years and a host of top players choosing club over country, Samoa were always going to be up against it.

Recruitment has long been a battle and the island nation is increasingly stuck on the losing side.

While boasting players of the calibre of captain Jack Lam and Bristol lock-loose forward Chris Vui, Jackson would have been thrilled to have had Worcester pair Michael Fatialofa and Melani Nanai and Leicester’s Jordan Taufua at his disposal.

Instead, they chose to eschew playing for a national team that can offer little more than pride in the jersey and the coverage of basic expenses.

“We’ve just got to make sure players want to play for Samoa and we get a group of guys who want to come here,” said Jackson after the Ireland defeat in Fukuoka.

“They put the jersey before a piece of paper.”

Jackson, whose contract expires in November, put his hand up for an extension but may not get one after an underwhelming tournament in which his team lost 34-0 to Scotland, their first scoreless result in 30 World Cup matches.

While lacking resources and depth, much of Samoa’s travails in Japan were self-inflicted as they racked up the penalties and six yellow cards, twice that of the next most offending teams.

Jackson complained vociferously about the referees’ lack of consistency, yet could not fix his team’s propensity for going high in the tackle despite the clear hard line set early by administrators.

Team spirit and an underdog heart may have endeared them to local fans, but their defence and set pieces were often a shambles and much too easily exploited by the tier one teams.

Samoa head into an uncertain future and, after finishing fourth in Pool A, will have to go through qualifying for the 2023 World Cup in France.

A harder line on player releases from their clubs for France might help Samoa’s cause but persuading young talent to stay at home rather than chasing contracts overseas is only likely to get tougher.

“There is pressure coming from all angles on players trying to feed their families and put a roof over their heads,” said Jackson.

“It’s difficult and I understand that. We can only focus on trying to develop them and capture those players early on.”