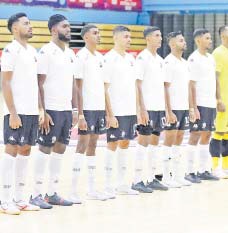 Fiji FA national Futsal head coach Jerry Sam is confident Fiji will be a team reckon in the Oceania Region in few years.

Sam said there was a lot of potential in Fijian players but he needed more time to prepare the best team.

“I am happy with the performance of both our teams at the OFC Futsal Cup but I guess there is more to work to form a formidable team,” Sam said.

“We had two teams and imagine if we had one team which I am sure would been threat in the tournament.”

“But it is always good to have a development team so we can know where we stand in such competitions.”

Sam said the boys got much exposure and experience playing in the tournament.

“It’s been long we played a competitive tournament and I am happy that our boys have been given more exposure in playing top teams from around the region.

“Futsal looks bright here in Fiji and I am sure in few years we will be on top.

“The boys really played their hearts out and had never say die attitude which is needed in the game of Futsal.”

The Digicel Bula Futsal Boys created history in the tournament with a hard fought 6-all draw against the Solomon Islands while the Fiji FA President’s Five reached the semi-finals.

Sam has been praised by many Futsal fans for bringing futsal to another level in the country.