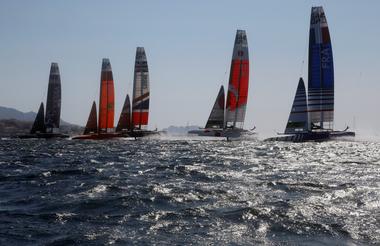 SailGP Teams compete during the start of the day one of the SailGP event in Marseille, France, September 20, 2019. REUTERS/Jean-Paul Pelissier

LONDON (Reuters) – Whoever wins SailGP’s inaugural $1 million prize, one thing is certain for Australian friends and rivals Tom Slingsby and Nathan Outteridge, they’ve agreed to stand each other a drink.

With four of the five events in SailGP’s debut season completed, Slingsby’s Australian team tops the leaderboard and qualifies for the winner-takes-all match race between state-of-the-art F50 catamarans, which appear to “fly” on foils above the water.

His closest rival among the five other national teams competing in SailGP is Japan, led by Outteridge, who only have to complete one fleet race off Marseille in southern France in order to join Slingsby in this weekend’s final.

“Nathan and I will always get along, it doesn’t matter if there is money on the table. At the end of this million dollar race nothing will change,” Slingsby told Reuters by telephone ahead of this week’s practice races in Marseille.

“We will just buy each other a drink,” Slingsby said, after joking about whether it was for the winner or loser to do so.

Described by some as sailing’s equivalent of Formula One, SailGP was launched by former America’s Cup winners Larry Ellison and Russell Coutts.

The series, which was also raced in New York, San Francisco and Cowes on the south coast of England, has been bankrolled by Ellison after his Oracle Team USA America’s Cup team lost the “Auld Mug” to Emirates Team New Zealand in Bermuda in 2017.

Slingsby, whose crew became the first to break the 50 knot (92.6 km per hour) barrier during racing in the Cowes leg, says Ellison’s backing has been key to getting sponsors on board.

“None of this would have happened without Larry Ellison …sponsors are seeing it is actually happening,” he said, adding that global audience figures were growing.