Sacrifices all worth it 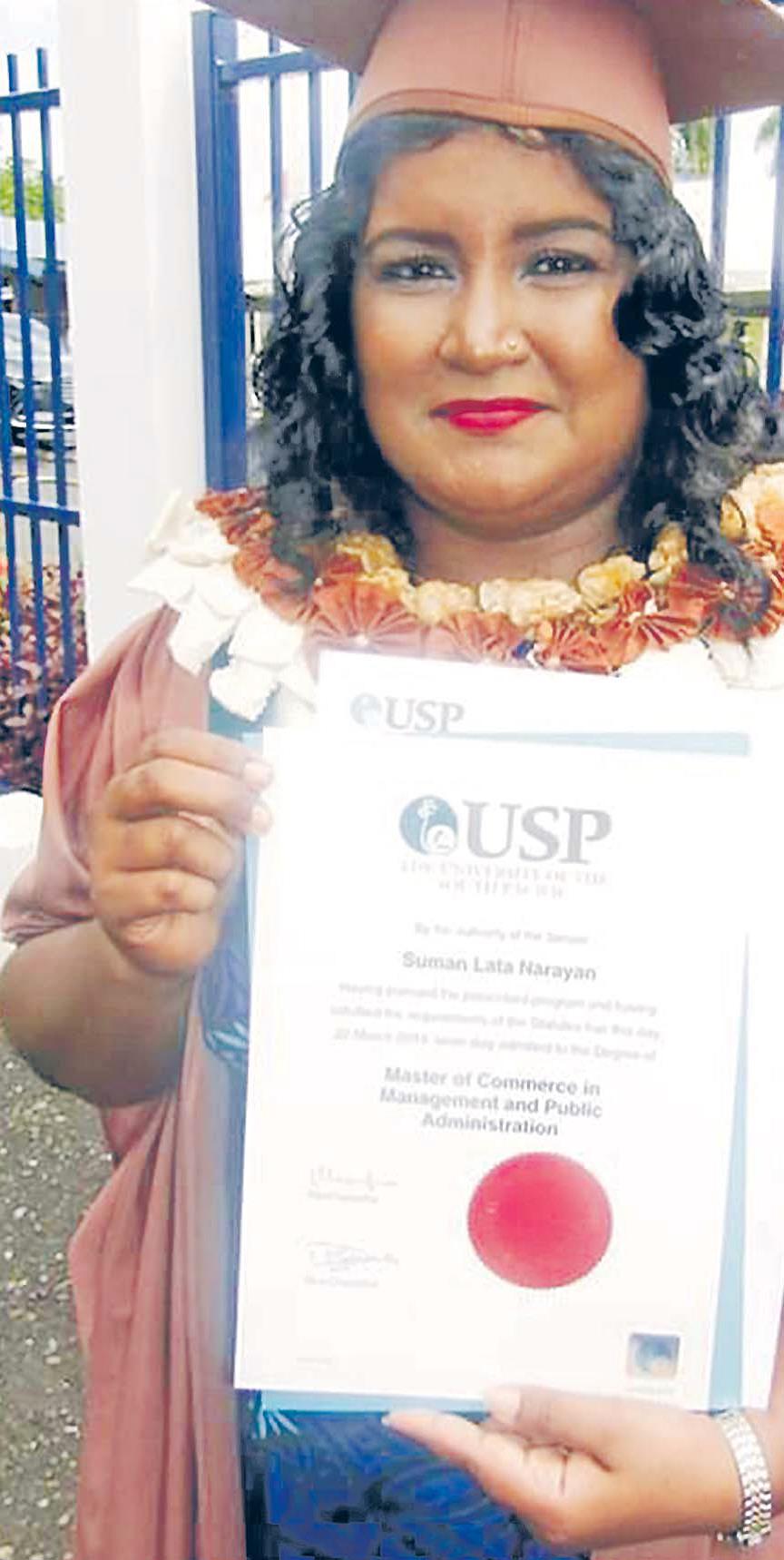 Suman Narayan with her Masters of Commerce in Management and Public Administration award after graduating from USP. Picture: SUPPLIED

AS Suman Narayan walked up the stage to collect her Masters of Commerce in Management and Public Administration award at the University of the South Pacific graduation, the single mother got emotional.

The long hours at work, the long waits at the bus stops to go home after every class at night and then the face of her young son came rushing to her.

The sacrifices was all worth it. For someone who started out with a Diploma in office administration and working as a legal clerk, it was an incredible journey.

“After I received my diploma, I got married but things didn’t work out well,” she said quietly.

“Soon after the separation, I started working for Ram Chand Lawyers as the litigation clerk. It was so difficult for me to because I did not have any idea about law and all the legal jargon.

“My employer, Mr Chand taught me a lot of things from reading to interpretation of legal documents and within a year I was well versed with all the legal matters. “I was in the legal field for about five years.”

But her family kept encouraging her to continue studying.

Suman went on to complete her Bachelor in Management and Human Resources Management from the Fiji National University (FNU) and began working at FNU as a tutor with the department of management for two years before being promoted to assistant lecturer in management and human resources.

During this time she pursued her Post Graduate Diploma and masters.

“My parents and my child are my major inspiration,” she said.

“My parents always wanted me to get higher qualifications so I can look after my son. My son’s innocence and understanding always kept me going.

“There were lots of challenges from the beginning. The financial problem was there as my father was the only breadwinner for the family and all the brothers and sister were at school.

“When my brother graduated from high school he got himself a job to help out dad while at the same time pursued his education.

“Then later when my son was still a baby, I started work and school. I normally started my work at eight and finished at 5pm sometimes at 6 and after that I went for my classes. I used to attend classes until 10pm.

“When I started work as a tutor we used to conduct classes until 10 pm and there were times I had to catch the bus to Nausori where we lived.

“There were even times when I used to stand on the roadside waiting for the bus until 10.30pm and by the time I reached home it was past 11pm but I didn’t give up. Playing dual role as the lecturer and student was even more challenging.

“Three out of five days I would go home late – two nights I conducted classes and one day I go for my classes. Marking assignments and exams papers took most of my family time. After work sometimes usually after nine-10, I used to sit down with my assignments and would go up to two to three in the morning.

“Being a single parent is a major turning point of my life. Whatever I do, I have to ensure that my action benefits my son always.

“I have dedicated my life to my son and his future so I have to be careful of the decisions I make in life. My family and my son are my motivation always.”

Suman hopes to now build her career in human resources and her next goal is to complete her PhD in the next five years.