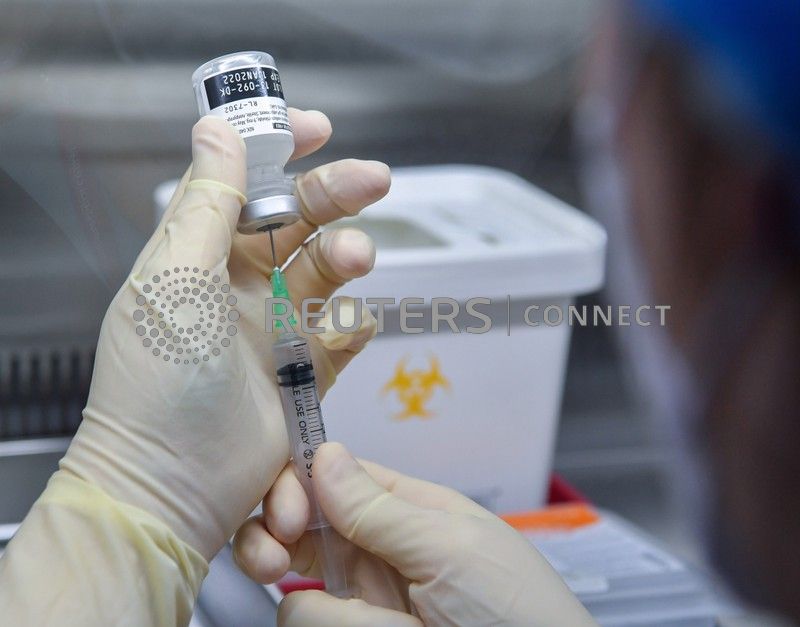 SEOUL (Reuters) -South Korea is considering plans to vaccinate workers at key businesses including chip and electronics firms to minimise disruptions to production, the government said on Thursday, amid global efforts to boost supply of scarce computer chips.

The Korea Disease Control and Prevention Agency (KDCA) and labour ministry said they were discussing options with other government agencies but no specifics had been decided.

Samsung Electronics, SK Hynix and LG Electronics said they had received the letter.

The move comes amid a global chip shortage that has affected manufacturers around the world, particularly carmakers. Samsung and SK Hynix are the world’s top two memory chip makers.

The South Korean government is trying to ramp up its inoculation drive after a slow start.

One plan under consideration is to provide vaccines for workers at units that run non-stop, and for those deemed essential to the economy.

The government also said it planned to accelerate talks with other countries on opening travel bubbles.

“Resuming international travel will mark the beginning of life going back to normal,” he said during a government meeting.

South Korea’s transport and culture ministries said they would only allow group tours for those who are fully vaccinated during the initial phase of any travel bubble.

The country reported 611 new coronavirus cases on Thursday, bringing the total to 146,303 infections, with 1,979 deaths.