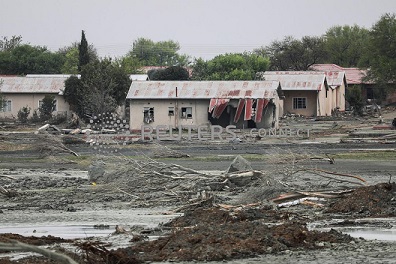 (Reuters) -South Africa’s Free State provincial government was mistaken in saying a second wall at the Jagersfontein mine waste dam had collapsed two weeks after the dam’s failure killed one person and injured dozens, an official said on Wednesday.

After heavy rains, water flowed out of a separate freshwater dam on the site, creating the impression of a second collapse, the official said, when in fact it was seepage.

“There is no imminent danger to life or property, that seepage has been contained,” Mbulelo Nokwequ, head of the Free State’s department of small business, development, tourism, and environmental affairs, told Reuters.

The provincial government late on Tuesday had issued a press release saying another wall of the mine dam had collapsed.

Jagersfontein Developments, which owns the dam, on Wednesday said there was “no further breach of any kind”.

The tailings dam collapse on Sept 11 unleashed a flood of grey sludge that swept away houses and cars, polluted rivers, and damaged 2,615 hectares of grazing land, according to government estimates.

Nokwequ said videos of overflowing water on the site were circulating on social media, causing panic, before the government put out its statement.

“Naturally there would have been a panic of some sort, because the people who are there are still recovering from the trauma of what happened on September 11, there is still that feeling of unease,” he said, adding however that the government needs to improve its communications.

A provincial government spokeswoman said an updated statement would be issued.