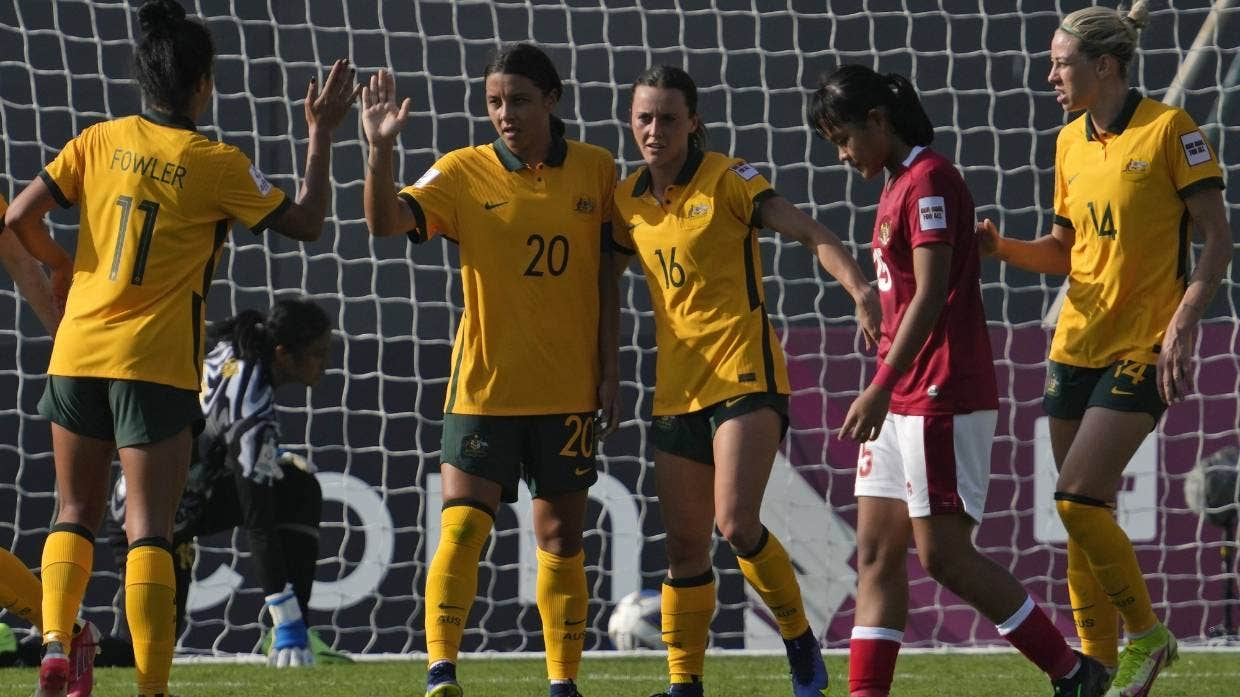 Matildas striker Sam Kerr celebrates with team-mates after scoring one of her five goals against Indonesia. Picture: STUFF SPORTS.

Kerr scored five goals including a hat-trick inside the opening 27 minutes in Mumbai on Friday as Australia put the lowest-ranked nation in the tournament to the sword.

Her haul takes her tally to 54 goals for her nation, going past Tim Cahill’s record of 50 international goals in the process.

It’s the first time a Matilda has scored five goals in a game since Kate Gill achieved the feat in a 15-0 win over Hong Kong in Coffs Harbour in 2007.

Friday’s result eclipses that thrashing as Australia’s biggest victory margin against Asian opposition and is the third-biggest win in Matildas’ history.

Indonesia, the world No.94 team making their first Asian Cup finals appearance in 33 years, were on the back foot from the outset and it took just nine minutes for Kerr to open her account.

Just two minutes later the 28-year-old made it a double at the back post to surpass Cahill’s record.

Arsenal’s Caitlin Foord got in on the act in the 14th minute, smashing home before young gun Mary Fowler made it four in the 17th minute.

Hayley Raso headed home in the 24th minute after Indonesia goalkeeper Fani misjudged her attempt to cut out a cross before Kerr completed her hat-trick from the penalty spot.

Carpenter thrashed home her second international goal with a thumping finish in the 34th minute before van Egmond wrapped up the first-half with their ninth goal, stroking home the second penalty awarded to Tony Gustavsson’s team.

Having scored just once in her previous 54 internationals, Carpenter got her second of the game and Australia’s 10th when her cross-cum-shot drifted over substitute goalkeeper Nurhalimah and into the net.

Van Egmond notched a quickfire double to complete her own hat-trick before Kerr smashed Australia’s third penalty of the match onto the crossbar.

Gustavsson gave Holly McNamara a debut from the bench as the Matildas showed no mercy in the second-term, piling on the goals including a first goal in Australian colours for Aivi Luik in her comeback match after reversing her decision to retire following last year’s Tokyo Olympics.

The Matildas continue their campaign on Monday against the Philippines, coached by ex-Australian mentor Alen Stajcic, while Indonesia take on Thailand in their next match.