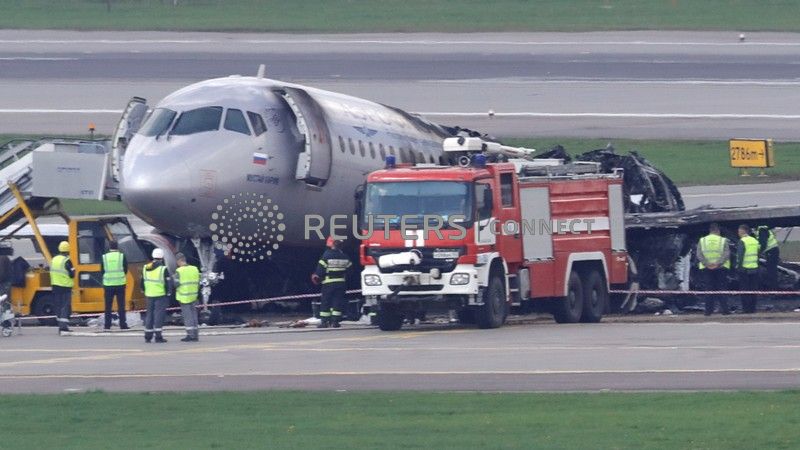 MOSCOW (Reuters) – Russian airline Aeroflot has scaled back the number of Sukhoi Superjet 100 flights it operates after one of its planes made a crash-landing last month, killing 41 people, according to data provided by a flight tracking website.

Flightradar24 data shows Aeroflot has also at times substituted Airbus or Boeing planes for the Superjet, the first new passenger jet developed in Russia since the Soviet Union collapsed.

Fallout from the crash risks undermining the aircraft’s reputation at a time when Russia is promoting another domestically made passenger plane, the M-21, as a rival to Boeing and Airbus.

Aeroflot and Sukhoi Civil Aircraft, the Superjet’s maker, declined to comment on the data or on the use of other aircraft instead of the Russian plane. Both the airline, Russia’s national flag carrier, and the manufacturer have said in the past that the aircraft meets all relevant international safety standards and will continue to be made and used.

The cause of the May 5 crash, the second deadly accident involving the Superjet in nine years of service, has not yet been established. Russian authorities said afterwards there was no reason to ground the Superjet.

Yet Aeroflot flew 129 – or about 7% – fewer Superjet flights in the two weeks after the crash than in the previous fortnight, the Flightradar24 data showed.

In one case, frightened passengers on a Sukhoi refused to continue their journey after an aborted take-off, forcing Aeroflot to lay on an Airbus instead, an airline industry source with direct knowledge of the matter said, a version of events corroborated separately by Russia’s RIA news agency.

Aeroflot after the crash began paying extra attention to safety checks and to scale back the Superjet’s usage to try to reassure passengers, the same source said.

More than 213,000 people have signed a petition demanding the plane be grounded since May 5.

Some Russian and foreign operators have complained about the difficulty of servicing the Superjet due to delays in sourcing spare parts. Irish airline CityJet and Belgian carrier Brussels Airlines turned their back on the Superjet citing those reasons.

State officials and airline executives say the airliner spends about half its time on the ground undergoing maintenance, and can fly only about a third as much as foreign-made rivals in a 24-hour period when in use.

They blame a lack of readily available spare parts and the complexity of servicing its engines.

Vitaly Savelyev, Aeroflot’s CEO, told Russian news agency TASS in 2017 that his company, which is majority-owned by the Russian state, might not have bought the Superjet at all if it was a private company.

Aeroflot, which has promised to buy a further 100 Superjets on top of the 49 it has already, is in a difficult situation because of the project’s political importance for Russia.

There are signs however that even some allies of President Vladimir Putin are growing weary of the aircraft.

Valentina Matviyenko, speaker of the upper house of parliament, in November publicly rebuked the transport minister over the large sums she said had been pumped into the Superjet in vain.

Russian newspaper Novaya Gazeta estimated in 2012 that $7 billion had been spent on the project, while Sukhoi has put the figure at $2 billion.

“Who needs it? … It’s not good for anything,” said Matviyenko. “Aeroflot says we bought them and they sit on the ground. Nobody abroad is buying them … What have we achieved?”

Mexican low-cost carrier Interjet, citing maintenance and parts problems, told Mexican daily newspaper El Universal just over a week after the crash that it was trying to sell its 20 Superjets and favoured Airbus 320s instead.

Regional carrier Yamal Airlines, Russia’s second biggest Superjet operator after Aeroflot, said a day after the crash that it was cancelling its planned purchase of 10 of the planes. It cited high servicing costs.

And RusLine, another regional carrier, told Kommersant it was scrapping provisional plans to obtain 18 Superjets as part of a leasing deal. The paper cited RusLine’s owner Nikolai Ulan as saying he thought the plane was safe but that passengers would be afraid to fly on it, making it harder for him to break even. RusLine did not respond to a request for comment.

The Superjet, which entered service in 2011, is predominantly operated inside Russia by regional airlines, corporations and government entities. Sukhoi had hoped to sell hundreds, but slack demand means only 138 of the planes are in use.

On the Moscow-Murmansk route, the one taken by the plane involved in the fatal crash, Aeroflot replaced the Superjet with either Boeing 737s or Airbus A320s in the five days after the accident, a practice it partially continued the week after.

This was done in direct response to the crash in order to try to calm passenger fears, the same airline source said.

There have been a spate of safety-related incidents and cancellations since May 5.

In one case, a Superjet flight from Moscow to Riga was held up after passengers noticed a burning smell and demanded a new plane. Engineers found nothing wrong, one of the passengers told state TV.

In another, on May 18, passengers on a Moscow-bound flight from the city of Ulyanovsk took fright after their Superjet aborted take-off because of a warning about the hydraulic system.

“Passengers were told that the flight was being delayed for technical reasons. Of course, after the catastrophe, they started to panic and refused to fly on the same plane. The psychological factor came into play,” the airline source with direct knowledge of the situation told Reuters.

Aeroflot flew the passengers to Moscow the next day on an Airbus A320 and engineers found nothing wrong with the Superjet involved in that incident either, the transport prosecutor’s office said.

Yevgeny Dietrich, Russia’s transport minister, said the situation was not “radically changed” from the pre-crash period.

“In fact, delays and cancellations occurred previously. You simply wrote about them less,” Dietrich told reporters.

His statement and the crash have highlighted the fact that many Superjets do not fly very often.

Flightradar24 data shows that 37 of 127 Superjets in commercial use globally did not make a single flight from April 22 until May 19, and that 45 did not make more than 10 flights during that period.

That tallies with expert reports, which have said foreign-made planes in Russia average nine hours flying time in every 24-hour period compared to between just three and four hours for the Superjet.

The same industry source said only about 50% of Aeroflot’s Superjets flew regularly and that Superjet pilots, who are paid for completed flights, had their salaries topped up to compensate for time spent on the ground.