Russia to press ahead with release of captive whales despite outcry 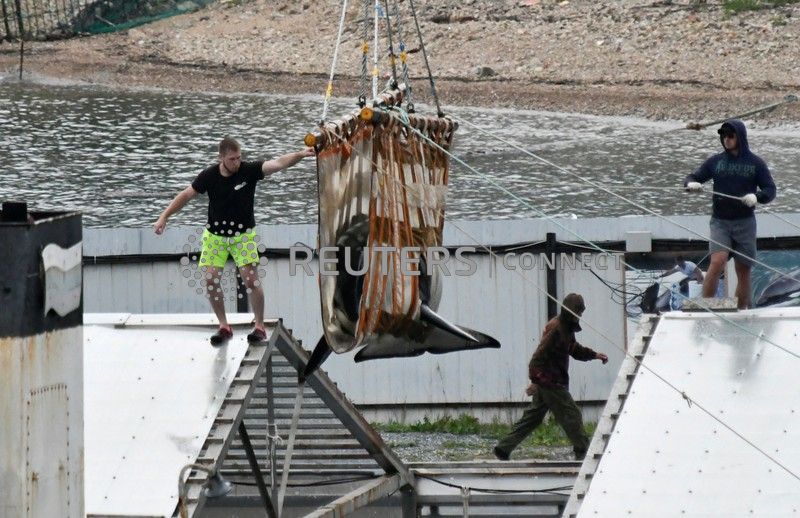 FILE PHOTO: Employees take part in an operation to transport and release two orcas at a facility, where nearly 100 orcas and beluga whales are held in cages, in Srednyaya Bay in Primorsky Region, Russia June 20, 2019. REUTERS/Yuri Maltsev/File Photo

MOSCOW (Reuters) – Russian research scientists defended the way they released eight whales back into the wild last week and said on Thursday they would release scores more of the captive animals in the same way despite anger from environmental groups.

Russia returned two killer and six beluga whales to their natural habitat in the Sea of Okhotsk last week.

They were the first in a group of almost 100 whales set to be released after being caught last year for commercial sale.

The plight of the animals, which were kept in Russia’s Far East in cramped enclosures likened by Russian media to a whale “prison”, became a cause celebre and prompted the Kremlin to intervene.

But the release of the animals – which saw them transported for six days across 1,800 km (1,100 miles) – was criticised by Greenpeace and international scientists who said it had been rushed, was conducted in secret and may have put the animals at risk of dying.

The Russian Research Institute for Fisheries and Oceanology, however, said at a news conference on Thursday that the operation had been a success. The two killer whales had been tagged and appeared to have successfully adapted in the wild, the scientists said. They did not say what had happened to the belugas.

“We think today that there is no other option than what we used,” said Kirill Kolonchin, director of the institute.

“The operation was successful, today we understand how we need to transport the animals and next time we will deliver them the same way,” he said.

Kolonchin said his institute planned to continue releasing the captive whales once every two weeks and that the next batch was due to be released next week.