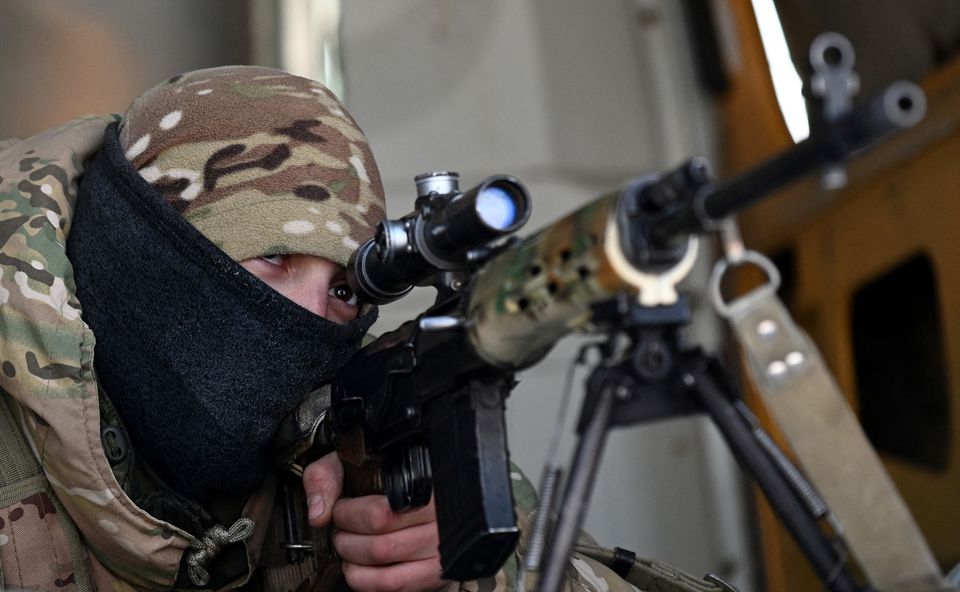 A sniper of the Russian armed forces takes part in military exercises at the Kadamovsky range in the Rostov region, Russia January 13, 2022. REUTERS/Sergey Pivovarov

VIENNA/MOSCOW, Jan 13 (Reuters) – Poland’s foreign minister said on Thursday that Europe was at risk of plunging into war as Russia said it was not yet calling time on diplomacy but that military experts were preparing options in case tensions over Ukraine could not be defused.

U.S. Ambassador Michael Carpenter said after talks with Russia in Vienna that the West should prepare for a possible escalation in tensions with Moscow. “The drumbeat of war is sounding loud, and the rhetoric has gotten rather shrill,” he told reporters.

Russia said dialogue was continuing but was hitting a dead end as it tried to persuade the West to bar Ukraine from joining NATO and roll back decades of alliance expansion in Europe – demands that the United States has called “non-starters”.

“At this stage it is really disappointing,” Russian Ambassador Alexander Lukashevich told reporters after a meeting of the Organization for Security and Cooperation in Europe (OSCE), the third leg in a series of East-West talks this week.

He warned of possible “catastrophic consequences” if the two sides could not agree on what Russia has termed security red lines but said Moscow had not given up on diplomacy and would even speed it up.

The Russian comments reflect a pattern of Moscow saying it wants to pursue diplomacy but rejecting calls to reverse its troop build-up near Ukraine and warning of unspecified consequences for Western security if its demands go unheeded.

Earlier, Polish Foreign Minister Zbigniew Rau told the 57-nation security forum: “It seems that the risk of war in the OSCE area is now greater than ever before in the last 30 years.”

While overlooking wars during that period in the former Yugoslavia and parts of the former Soviet Union, his comment highlighted the level of European anxiety over Russia’s build-up of some 100,000 troops within reach of its border with Ukraine.

Rau reported no breakthrough at the meeting, which followed Russia-U.S. talks in Geneva on Monday and a Russia-NATO conference in Brussels on Wednesday.

Russian Deputy Foreign Minister Sergei Ryabkov said the earlier meetings had shown there was a “dead end or difference of approaches”, and he saw no reason to sit down again in the coming days to re-start the same discussions.

He told RTVI television Russian military specialists were providing options to President Vladimir Putin in case the situation around Ukraine worsened, but diplomacy must be given a chance. “I must reiterate that dialogue is still underway at many levels and in many directions,” Ryabkov said.

The Russian rouble fell by more than 2% against the dollar on Ryabkov’s comments, which also prompted a sell-off in government bonds. A trader at a major Russian bank told Reuters the market had partly reacted to a comment from Ryabkov, in reply to a question, that he would neither confirm nor rule out the possibility that Russia might deploy “military infrastructure” in Cuba and Venezuela. read more

U.S. Secretary of State Antony Blinken told MSNBC in an interview: “The jury’s out on which path Vladimir Putin is going to choose. Is he going to choose the path of diplomacy and dialogue to resolve some of these problems or is he going to pursue confrontation and aggression?”