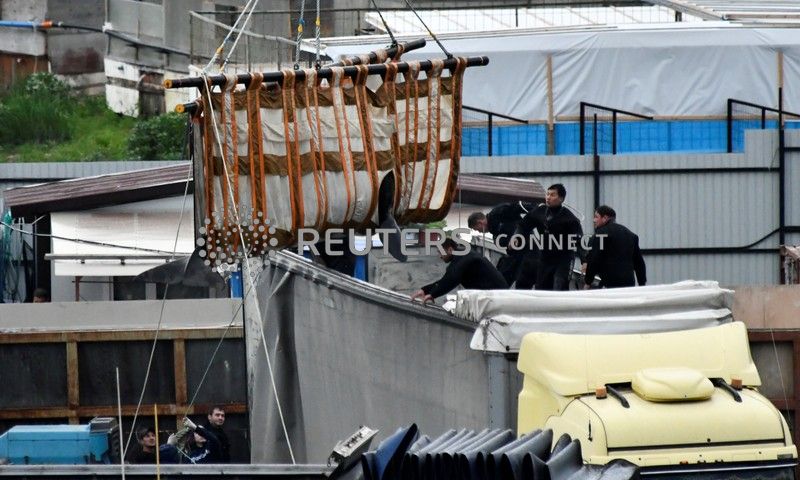 FILE PHOTO: Employees take part in an operation to transport and release two orcas at a facility, where nearly 100 orcas and beluga whales are held in cages, in Srednyaya Bay in Primorsky Region, Russia June 20, 2019. REUTERS/Yuri Maltsev/File Photo

MOSCOW (Reuters) – Russia released two killer whales and six beluga whales back into the wild on Thursday, the first group of almost 100 whales whose detention in the Far East since last year caused an international outcry.

The whales, caught last summer in order to be sold to marine parks or aquariums in China, were released in the Gulf of Sakhalin, part of their natural habitat in the Sea of Okhotsk, a Russian oceanography research institute said in a statement.

The plight of the whales, which were held in cramped conditions, captured the imagination of people around the world and prompted celebrities such as actor Leonardo DiCaprio to petition for their release and for the Kremlin to get involved.

The Kremlin ordered local authorities in the Russian Far East to intervene months ago, but the problem of how to release them without causing them harm caused delays.

International scientists raised concerns that the well-being of the whales would be jeopardised if they were not returned to their original habitat.

The move to begin their release into their natural habitat was announced last week during President Vladimir Putin’s annual question and answer phone-in, which he uses to burnish his image among the Russian public.

“Vets conducted all the necessary tests before they were freed and the results showed the animals are in good health,” the oceanography research institute said on Thursday.

The two killer whales, which were released separately from the beluga whales, were “nervous” about their return to the wild and swam near to the shoreline for hours before finally heading out into the open sea, it said.

The orcas have been tagged with tracking devices so their movements and behaviour can be monitored.

The Kremlin has said Russia has no direct ban on catching whales, but that they can only legally be caught in specific circumstances, for scientific and educational purposes.