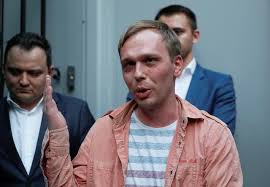 Russian journalist Ivan Golunov, who was freed from house arrest after police abruptly dropped drugs charges against him, speaks with the media in Moscow, Russia June 11, 2019. REUTERS/Shamil Zhumatov

MOSCOW (Reuters) – Russian police on Tuesday abruptly dropped drugs charges against journalist Ivan Golunov, a rare U-turn by the authorities in the face of anger from his supporters who alleged he was framed for his reporting and threatened to stage a mass protest in Moscow. Golunov, a 36-year-old journalist known for exposing corruption among […]