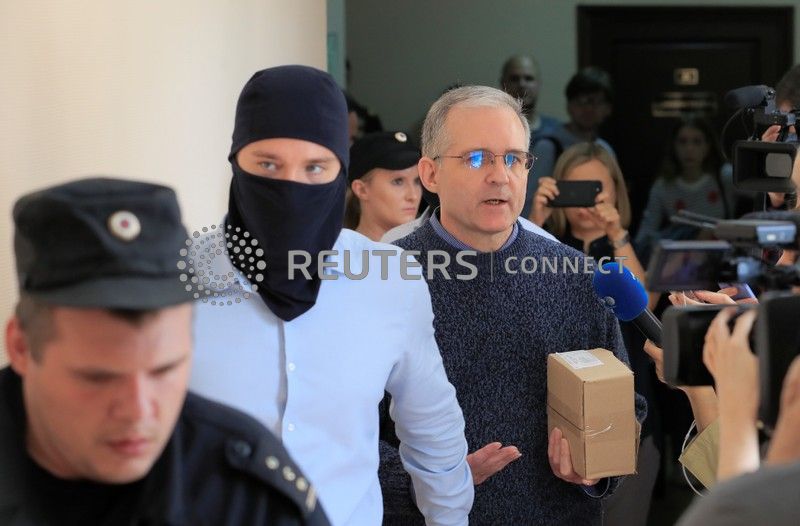 Former U.S. Marine Paul Whelan, who was detained and accused of espionage, is escorted inside a court building in Moscow, Russia August 23, 2019. REUTERS/Tatyana Makeyeva

MOSCOW (Reuters) – A court on Friday extended by two months the pre-trial detention of a former U.S. Marine who has been held in Russia on suspicion of spying since December and who accused Moscow prison authorities of injuring him.

The court ordered Paul Whelan held until the end of October, as Russian news agencies reported that authorities said they planned to wrap up their investigation into him in two weeks and present definitive accusations.

Whelan, who denies the allegations against him, said the court hearings were a waste of time.

“It’s simply a dog and pony show for the media,” he told reporters. “We are not doing anything at all. We are just sitting around and walking back and forth.”

Whelan, who holds U.S., British, Canadian and Irish passports, was detained by agents from Russia’s Federal Security Service in a Moscow hotel room on Dec. 28 after a Russian acquaintance gave him a flash drive which his lawyer said he thought contained holiday photos, but which actually held classified information.

Whelan believes he was set up in a politically-motivated sting..

On Friday, he said he was the victim of “a political kidnapping,” and that he had been subjected to an isolation regime designed to force him to make a false confession.

Whelan also told reporters that he had received an injury while in jail, which his lawyer told Russian news agencies happened while he was being moved from one cell to another.

His lawyer, Vladimir Zherebenkov, said Whelan was suffering from a long-standing groin hernia that his client said prison authorities aggravated by dragging him. Whelan was willing to be operated on in Russia, Zherebenkov added.

The presiding judge ordered an ambulance to be called. A Russian medic then examined Whelan before concluding there were no grounds for him to be hospitalised.

The U.S. embassy on Friday asked the Ministry of Foreign Affairs for immediate access to Whelan to discuss “his serious health allegations,” embassy spokeswoman Andrea Kalan said on Twitter.

Whelan’s brother, David Whelan who lives in Canada, denounced the court proceedings as a farce and said he was worried about Paul’s physical condition. He said the two have not spoken directly since December.

“While his statement was cut off, what we heard makes us concerned about his treatment at Lefortovo prison,” David Whelan said in an email.

If found guilty, Whelan faces up to 20 years in jail.