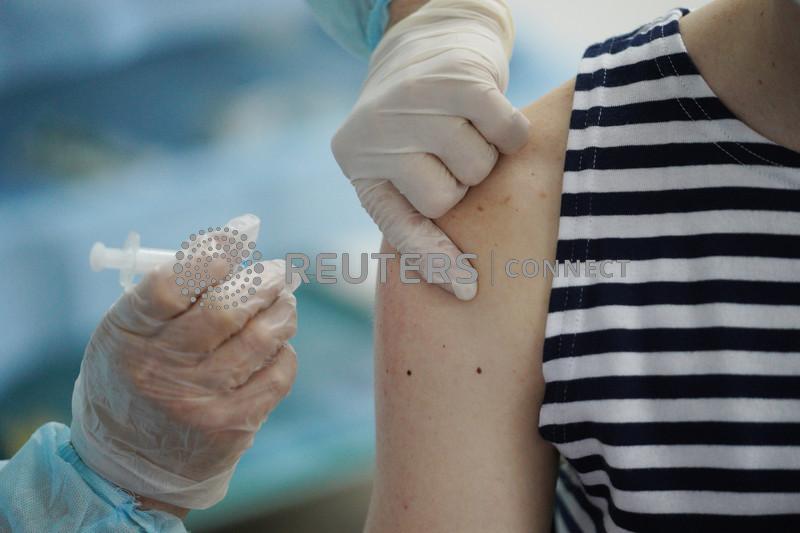 FILE PHOTO: A new recruit of Russia's Baltic Fleet forces receives a dose of Sputnik V (Gam-COVID-Vac) vaccine against the coronavirus disease (COVID-19) at a recruiting station in Kaliningrad, Russia May 27, 2021. REUTERS/Vitaly Nevar

MOSCOW (Reuters) – Russian authorities said on Wednesday they were scouring social networks and media websites to find people spreading false claims about the dangers of COVID-19 vaccination, the latest in a series of measures to invigorate sluggish inoculation rates.

Russia’s daily coronavirus-related deaths are near record highs after a surge in cases, and authorities say the level of collective immunity, which includes those who are vaccinated or have recovered from the virus, is just above 50%.

State healthcare regulator Roszdravnadzor said it had instructed its regional branches to report people – including medical professionals – who “deliberately spread false information about the dangers of vaccination”.

Roszdravnadzor told Reuters it had already reported more than 30 anti-vaxxers, who if convicted could face up to five years in prison.

Some of the country’s most prominent doctors have also joined efforts to convince anti-vaxxers to get inoculated.

In an open letter published on Wednesday by RIA news agency, 11 doctors invited prominent Russians who are against vaccination to visit “red zones” treating the most severe cases of COVID-19.

“Maybe after this, you will change your position and fewer people will die,” the letter said.

Russia was quick to roll out its Sputnik V vaccine when the pandemic struck last year, but take-up has been slow, with many Russians citing distrust of the authorities and fear of new medical products.

President Vladimir Putin, who said last week that he had been revaccinated, has stressed the need to accelerate Russia’s vaccination campaign.

Speaking to reporters on a conference call on Wednesday, Kremlin spokesman Dmitry Peskov said Russia was no different than other countries in terms of the presence of anti-vaxxers, which he described as a limited number of people.

Peskov said the healthcare regulator’s initiative was not the Kremlin’s prerogative and that it was not up to it to decide how doctors who dissuade people from getting vaccinated should be punished.

“Of course it would be bad to turn (this initiative) into an a witch hunt,” Peskov said. “A sober and balanced approach is needed here.”