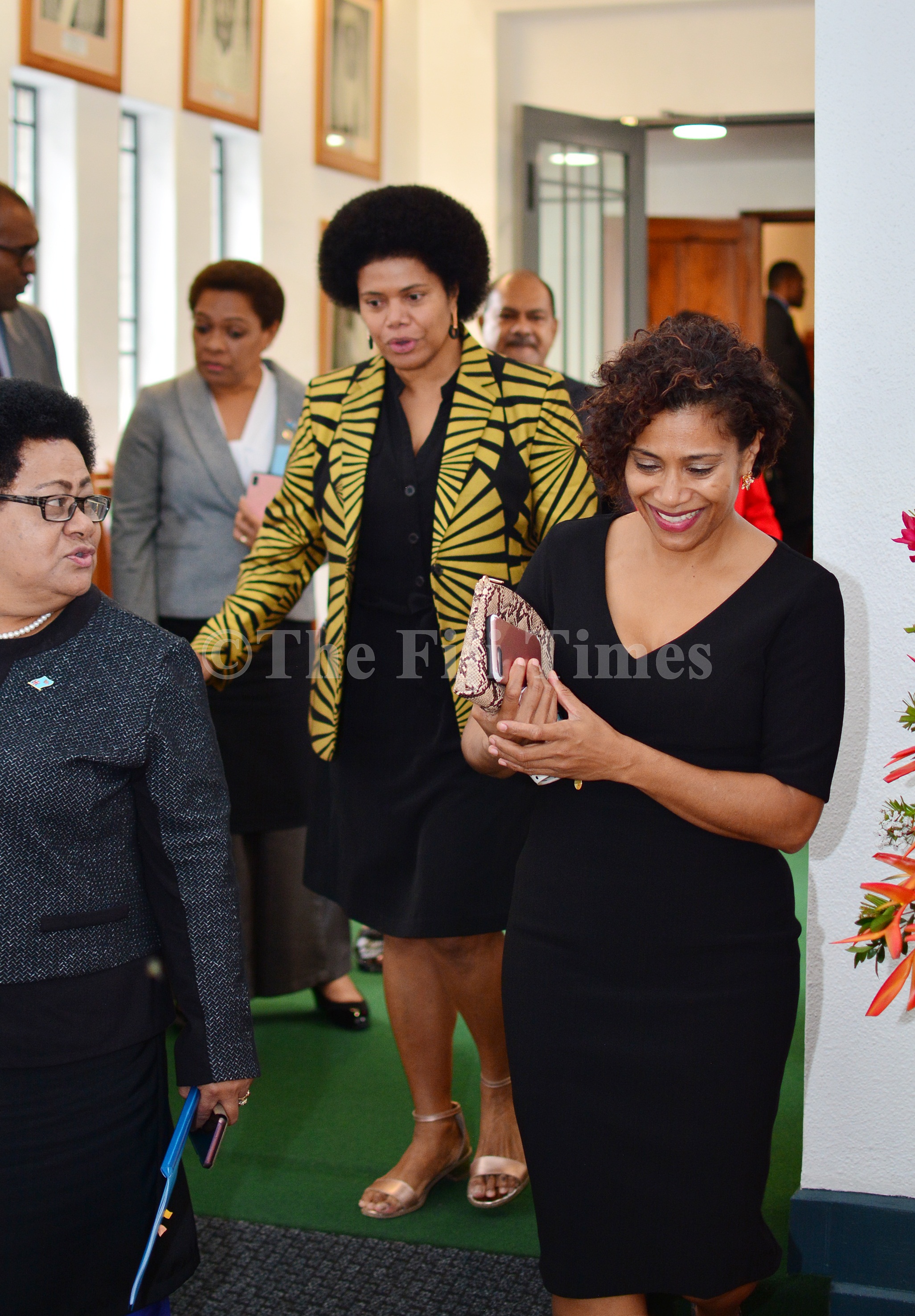 Opposition MP's Lenora Qereqeretabua and Lynda Tabuya with the Assistant Minister for iTaukei Affairs Selai Adimaitoga during a break in the parliamentary sitting. Picture: JOVESA NAISUA/FILE

WOMEN should be treated equally, be free and safe from discrimination and violence in our communities and most certainly in the workplace.

This is the call from the Fiji Women’s Rights Movement after Speaker of Parliament Ratu Epeli Nailatikau ruled on Friday that a matter of privilege filed by Opposition MP Lynda Tabuya claiming that she was personally attacked by Prime Minister Voreqe Bainimarama was not a breach of privilege.

In a statement released on Friday, FWRM said they were extremely disappointed by the misogynistic comments and gestures made in Parliament.

FWRM said in light of the recent surge of violence against women in Fiji, it was appalling that men in the highest positions of leadership in Fiji were perpetuating regressive attitudes and discrimination towards women.

“This is not the first time a member of Parliament has expressed ignorant views on women, which is unacceptable,” FWRM highlighted in a statement.

“Fiji has a high incidents rate of workplace harassment. The Parliament as the highest workplace in a country is where one would least expects this appalling behaviour.

“The shaming of a woman member of Parliament for her choice of dress in Parliament instead of focusing on issues of national interest reflects widely on the negative attitudes towards women and the state of gender equality in Fiji.”

The movement said the PM and Attorney-General Aiyaz Sayed-Khaiyum were recently among those who condemned Opposition MP Mosese Bulitavu for shifting the blame of domestic violence to women.

“Yet, they made comments to demean a woman on the state of her dress, not on social media but within the Parliament and on national television.

“It is integral now more than ever to promote attitudes towards women. CSOs, NGOs and women’s groups in Fiji, the Pacific and globally have continuously advocated, lobbied and raised awareness on these issues but uninformed, misogynistic comments by prominent members of society and elected leaders threaten the progress we have made and the efforts towards addressing it.”

FWRM said Fijian leaders must take responsibility to be informed of gender equality and condemn all forms of discrimination.

“We call for more co-operation and awareness on human rights issues. We must collectively denounce misogyny in Fiji.”