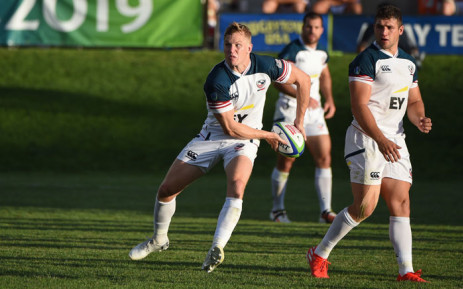 (Reuters) – The United States have opted to select an extra forward in their 31-man squad for the World Cup in Japan.

Announcing the squad on Sunday, coach Gary Gold explained that he had made the decision in the expectation of an attritional World Cup.

“We’ve gone with 18 forwards and 13 backs,” Gold said. “We think that the attrition for this rugby World Cup, especially our pool, is going to take it out of our forwards, so we’ve gone with an extra forward.

“We’ve got good depth in almost every position, I think we’re well covered. Where I think we are very lucky is that we’ve got quite a few guys who can play in multiple positions.”

The U.S. Eagles are in a tough Group C with England, France, Argentina and Tonga.

They play their opening match against one of the tournament favorites England in Kobe on Sept. 26.

The U.S. squad features players who have accumulated 677 test caps between them, including 10 who have played in a previous World Cup and three selected for a third campaign — captain Blaine Scully, Eric Fry and Thretton Palamo.

In 2007, Palamo, a center, was at the time the youngest to ever play in a World Cup.

The U.S. have played in all but one World Cup since the event’s inception in 1987 but have never won more than one game in a single campaign.

Yet the Eagles will head to Japan encouraged by the way they came from behind to claim a dramatic 20-15 victory over Canada in Vancouver on Saturday, their third win over their North American rivals this year.

Coach Gold said afterwards that his team would still need to improve to compete with the game’s big dogs.

“The lessons we learned tonight were very clear,” he said.

“We can’t be making errors like that, giving penalties away, and giving teams like Canada field position where they can play and put us under pressure.

“With respect, in our pool, if we do that against teams we are going to play against, it’s going to be a very long night.”