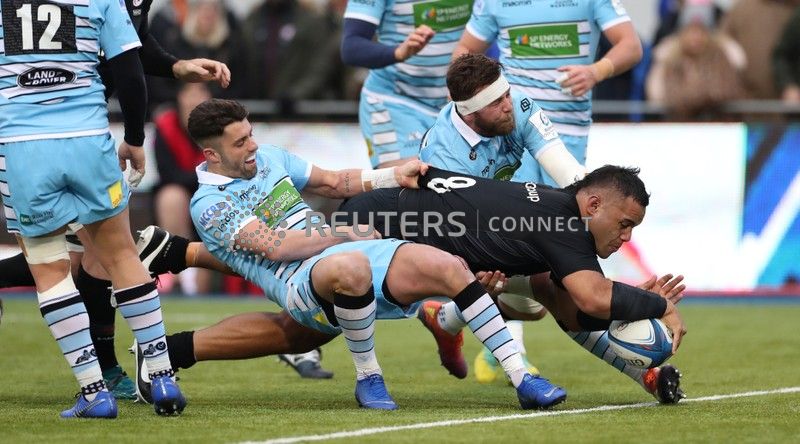 (Reuters) – Holders Saracens ensured themselves a home tie in the Champions Cup quarter-finals as they beat Glasgow Warriors 38-19 at home on Saturday to finish with a 100 percent pool stage record.

A thrilling first half saw three tries apiece with Ben Spencer, Vincent Koch and Billy Vunipola going over for the hosts while Tommy Seymour, Ali Price and Ryan Wilson all scored for Warriors.

Saracens prevailed despite preparations being disrupted when England captain Owen Farrell was withdrawn shortly before kickoff to undergo surgery on his thumb, which should keep him sidelined for seven to 10 days before the start of the Six Nations.

Sarries had to wait until deep into the second half for lock Maro Itoje to power over against the spirited Scottish side before Will Skelton rounded things off for the hosts with a fifth try.

Yet, despite the defeat, Glasgow also qualified for the last eight in second place in Pool 3 as one of the best three group runners-up.

Racing 92 underlined their strength at home in the competition as they eventually overwhelmed Scarlets 46-33 on Saturday to earn themselves a quarter-final tie in Paris.

Their bonus point win ensured they topped Pool 4 ahead of Ulster, who also qualified by beating Leicester Tigers 14-13 away in a nailbiter.

Racing, runners-up twice in the last three seasons, ran in six tries but the result was still in doubt until the latter stages as the Welsh visitors played some intrepid rugby.

The hosts, who had won their last six home games in Europe’s leading club competition, ran in two tries before halftime through Juan Imhoff and Henry Chavancy but still trailed 16-15 with Steff Evans going over for Scarlets and Dan Jones slotting three penalties and a conversion.

When Johnny McNichol scored for Scarlets early in the second half and Jones converted to put the visitors 23-15 ahead there were some nervousness around the stadium but Racing hit back.

Simon Zebo’s try narrowed the gap and although Jones added another penalty, tries by Virimi Vakatawa, Teddy Iribaren and a second for Zebo gave Racing a measure of control.

Ulster reached the quarter-final for the first time since 2014 but did it the hard way as they trailed 13-0 away against a Leicester side only playing for pride but who included the likes of England internationals Jonny May, George Ford, Manu Tuilagi, Ben Youngs and Dan Cole in their ranks.

Second-half tries by Marty Moore and Robert Baloucoune earned them victory and one of the best runners-up spots.

Munster muscled their way into a record 18th Champions Cup quarter-final with a titanic 9-7 win over Exeter Chiefs at their Thomond Park fortress, eliminating their English challengers in the process.

Don Armand’s try had given Exeter the halftime lead but the visitors, who needed a seven-point winning margin to reach the knockout stages, finally succumbed to fly-half Joey Carbery’s 72nd minute penalty, which completed his decisive nine-point haul for the Irish province.

In the other Pool 2 match, Castres beat Gloucester 24-22, winning with a stoppage time try from Ma’ama Vaipulu that gave the French champions the lead for the first time in the match. Neither side made it to the last eight.

The other three quarter-final spots will go to Edinburgh, who beat Montpellier on Friday to top Pool 5, and both Leinster and Toulouse, who are already guaranteed a place before the final matches in Pool 1 on Sunday.

Patient 9 allowed to travel out of Vanua Levu