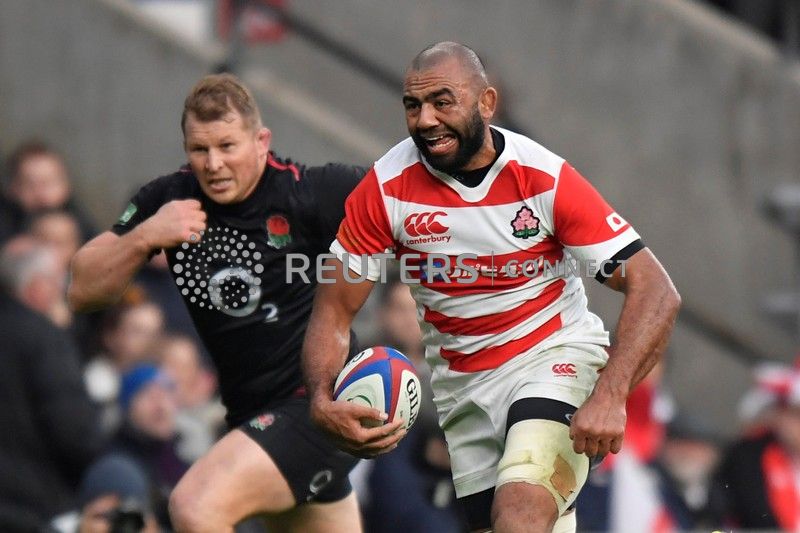 SAPPORO, Japan (Reuters) – A wide smile breaks across the face of captain Michael Leitch as he delivers his “outrageous statement”: Japan are aiming to win the Rugby World Cup on home soil later this year.

Despite Japan never having progressed from the pool stages at eight previous World Cups, Leitch says his team will take to the field believing they can disrupt the established rugby world order and win the Webb Ellis Cup.

Failure to progress from a pool that also includes Ireland, Scotland, Russia and Samoa would be viewed as outright failure, he adds.

“You cannot be accepting of losing and going out there and doing your best and coming out of there without making the quarter-finals,” Leitch told Reuters in an interview this month.

“We want to make the quarter-finals but ideally, we want to win the World Cup.

Changing the behaviour and mentality of the Japanese team has been integral to coach Jamie Joseph’s preparations for the Sept. 20 to Nov. 2 tournament.

“Having the right mentality for the national team is paramount for us in succeeding at the World Cup,” said Leitch.

“Another thing that Jamie Joseph brought in was consistency with our programme and the way we prepare for our test matches; it is the same every week.

“So that is why we are getting consistent performances.”

Consistency is crucial at the World Cup, where teams must deal with injuries and fatigue over seven gruelling weeks.

Japan are regarded as one of world rugby’s most exciting teams and while they have often been let down by a lack of discipline and fitness, particularly in the latter stages of games, they have come a long way in recent years.

Their progress can be measured in that famous victory over South Africa at the 2015 Rugby World Cup. They have also recorded comfortable wins over Italy (2018) and Tonga (2017), and managed a draw with France in Paris (2017).

Leitch, who has made over 50 appearances for the ‘Brave Blossoms’ since his debut in 2008, says much of their recent success was down to Joseph’s work to instil a more ruthless mentality in the side.

“I have seen a massive change in the Japanese mentality and the biggest chance I noticed was in 2015 where we started to beat quality sides and then beat South Africa at the World Cup,” he added.

“The Japanese mentality has gone from being scared and not touching great players to seeing a great player but getting really stuck into him, not fearing All Blacks or fearing key players from the England squad.”

Playing in front of an expectant home crowd and against some of the best players in the world come September will be the ultimate test for Japan, and Leitch said the players should be thriving on the pressure that comes with it.

“It is kind of scary because you live in an environment with so much pressure and you perform in it so when you go outside of that environment you are expected to still perform and this is when you get inconsistent performances,” he said.

“That is another key area …trying to nail our key performances around when it is easy compared to when it is tough.

“Pressure in general? I love pressure.”

Leitch was speaking in his role as a Land Rover Japan ambassador at a grassroots festival for children in Sapporo.