Rugby – Seasons end in England and Wales – except English Premiership 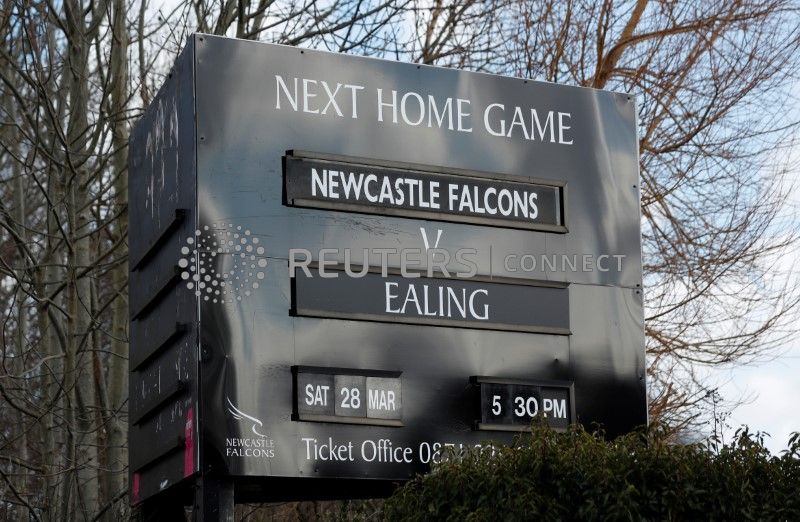 Signage at Kingston Park, Newcastle referring to a Newcastle Falcons fixture after the RFU confirmed the end of the 2019/20 season for all league, cup and county rugby in England with the exception of the Premiership, Newcastle, Britain March 20, 2020. REUTERS/Lee Smith

LONDON (Reuters) – England’s Rugby Football Union (RFU) and Wales’ governing body (WRU) on Friday confirmed the end of the 2019-20 season for all league, cup and county rugby due to the coronavirus pandemic but the English Premiership has been excluded.

The RFU earlier this week suspended all rugby activity until April 14 while the Premiership halted the season for five weeks after the British government advised against mass gatherings that required the presence of emergency workers.

“The decision to confirm the end of the season was taken to assist with long term planning and provide clarity to the game at a time of continuous change,” the RFU said in Friday’s statement.

RFU CEO Bill Sweeney said they were working on the ramifications of ending the season early and would announce their decisions next month.

“We… have instigated a thorough process to ensure fair and balanced outcomes for the game,” he said.

“We will communicate these outcomes by the middle of April. While we would like to provide all the answers now, we need some time to get it right for the best interests of the game.”

The WRU’s cancellation of the season applies to all league and cup competitions, including the cross-border competition between Welsh and Scottish clubs that was due to begin next month.

“We were particularly aware of the impact on clubs with the potential to be promoted or win competitions, but in the end we have had to make the decision to ensure we play our part in safeguarding Welsh communities,” WRU CEO Martyn Phillips said.

“We know clubs will be disappointed but also hope they will be understanding, given the circumstances.”

The RFU said it was in discussions with the Premiership to review the next possible steps after the coronavirus outbreak brought world sport to a standstill.

Exeter Chiefs top the Premiership standings with 45 points after 13 games, five ahead of Sale Sharks with Bristol Bears in third place a further two points behind.

This year’s Six Nations Championship was hit by the coronavirus with four matches called off and no dates have been set for completing the tournament.