Rugby – Saracens on course for another double 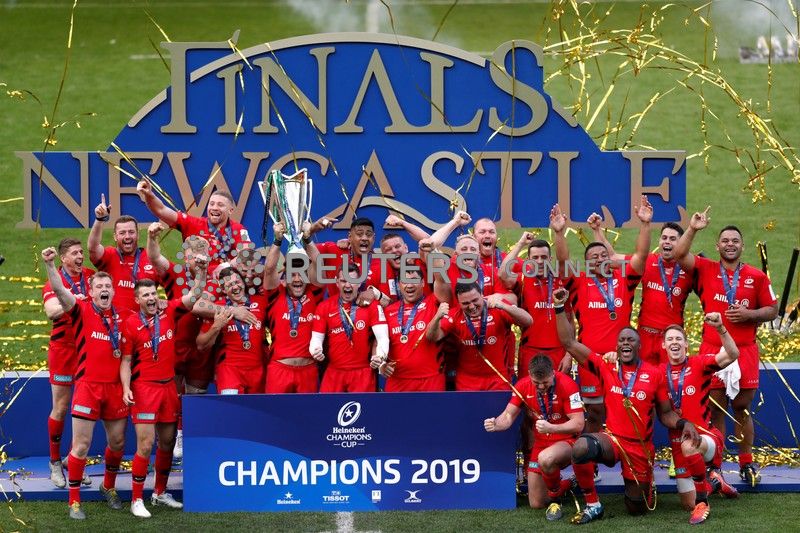 LONDON (Reuters) – Pundits have been queuing up to acclaim Saracens as maybe the best club side in rugby history and while that judgement will always be subjective, they can make another tangible mark in the Premiership final against Exeter on Saturday.

After overwhelming Leinster in the European Cup final three weeks ago, they are strong favourites to become English champions for the fourth time in five years and complete a second domestic/European double.

Two of those Premiership wins have come over Exeter, who claimed their solitary title two years ago after beating Saracens in the semi-finals when they suffered something of a hangover from the European final a week before.

The two teams are by far the best in the Premiership, both securing a top-two finish three weeks ago, and both dismissed their semi-final opponents with relative ease.

Saracens fell behind to an early Gloucester try but then poured on the power to win 44-19, while Exeter withstood a brief Northampton flurry to emerge victorious 42-12.

Saracens do enjoy significant financial backing which is the envy of many of their rivals, and are currently under investigation by Premiership Rugby for a potential salary cap breach. However, the club insist they have complied with the regulations.

Such has been Exeter’s consistency over the last few years that it is easy to forget it was only nine years ago when they earned promotion to the top flight after a long climb from the lower leagues.

Under astute coach Rob Baxter they have consolidated and progressed every season, and though their forward-possession based game is not every neutral’s cup of tea, it has proved extraordinarily effective.

In fact the only feasible way Saracens can be beaten is if Exeter starve them of ball, but even then they face the additional challenge of breaking down a defence that reached remarkable levels of intensity against Leinster.

“Their linespeed is so good that they look offside all the time but when you slow down the footage you can see they’re not, they just defend with such ferocity,” said former England lock-turned pundit Ben Kay.

Even if Exeter do hang on to the ball and make progress via their favoured pick and go approach, Saracens are unlikely to be fazed, having seen Leinster dominate possession in the semi-final but look less likely to score as the game went on.

Baxter was unimpressed by criticism of his team’s approach by Northampton following the semi-final, saying: “We don’t have one predetermined way, we have a number of ways.”

“All I ask is that when people make snap judgements on style of play, believe what you see with your own eyes,” he added.

“If all you want to focus on is the period of play when we are five metres from the line, do that, but there are another 95 metres on a rugby field. What about how we got there and the decisions we made to get there?”

Saracens coach Mark McCall would never dream of commenting on another team’s style – he barely even talks about his own. He too, however, recognises that there are different ways to win at times and he has the depth of quality that allows Saracens to excel at all of them.

They can go toe to toe with an Exeter, using the tactical kicking of halfbacks Ben Spencer and Owen Farrell to turn their opponents, or they can attack the space through their prolific back three of Alex Goode, Liam Williams and Sean Maitland.

They are without injured prop Mako Vunipola, but England and Lions hooker Jamie George and captain Brad Barritt provide leadership, power and ball-carrying, while their England second-row duo of Maro Itoje and George Kruis are unquestionably world class in everything they do.

It is a rich mix and, backed up by a culture that seems to develop a real feeling of teamship, makes them favourites to stamp their greatness all over Twickenham again on Saturday and probably for several years to come.