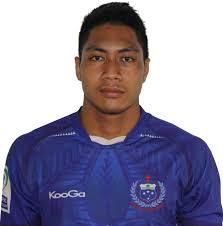 (Reuters) – Former Samoa under-20 flanker Faiva Tagatauli died on Thursday morning after suffering a suspected head injury while playing for his club at the weekend, the Samoa Rugby Union (SRU) said in a statement.

Tagatauli was playing for Vaimoso Rugby Club on Saturday when he indicated he wanted to be replaced 10 minutes from the end. He left the field unaided but lost consciousness on the sidelines and went into cardiac arrest.

Emergency services revived the 27-year-old before he was taken to the National Hospital, where he spent four days in the high dependency unit before dying on Thursday.

“Our thoughts and prayers are with Faiva’s wife Seutatia, and their son as well as their family at Fagamalo at this time,” SRU chief executive Faleomavaega Vincent Fepuleai said.

“We will do all possible within our means to offer the support in this difficult time.”

Tagatauli’s death comes at a time when the sport is under increased scrutiny following the deaths of three players in France last year as a result of injuries sustained while playing.

In May, 17-year-old Adrien Descrulhes was found dead in his bedroom the morning after he suffered a concussion while playing for Billom, with a preliminary autopsy report confirming he had been killed by a brain hemorrhage.

In August, Aurillac’s Louis Fajfrowski, 21, died in the changing room during a friendly game after suffering a heart attack.

Fajfrowski collapsed after a tackle and a subsequent investigation found his heart may have stopped because he had been hit in the chest.

In December, Stade Francais youth flanker Nicolas Chauvin, 18, broke his neck and died after being caught in a two-man tackle.

Fepuleai said the SRU recognized the importance of player welfare.

“We work closely with the Rugby Players Associations and World Rugby to ensure training and awareness programs are rolled out through match officials, coaches and administrators,” he added.