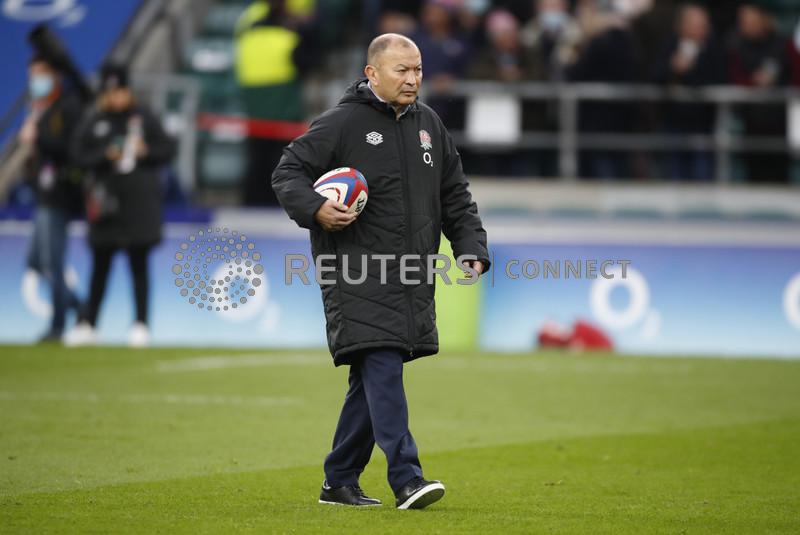 LONDON (Reuters) – Eddie Jones’s vision of a “New England” has moved a little into sharper focus via a hat-trick of November victories but the project remains very much a work in progress and all geared towards the 2023 World Cup, the coach said on Monday.

After beating Tonga and Australia, England signed off with a dramatic 27-26 victory over world champions South Africa on Saturday, scoring three superb backline tries in the process.

Conceding 18 penalties – England have averaged 13 over their last 10 games – was a downside as they struggled to deal with South Africa’s dominance for long periods but, coming off a fifth-placed finish in the Six Nations, it was undoubtedly a positive month.

“We set out at the start of the autumn to create a New England which evolved around changing selection, bringing some younger players in and being more aggressive without attack as the game required,” Jones told a news conference.

“While we’ve had good results, there’s a lot of improvement in us, but the great thing is that we’ve got four campaigns until the World Cup in 2023 so the Six Nations is a great opportunity for us to keep improving.”

After the kick and chase approach that England followed last year, their willingness to get the ball into the hands of their talented backs has been one of the most uplifting aspects of the autumn.

Jones, however, said that was less to do with a change of approach from him and more to do with adapting to a shift in emphasis by World Rugby and match officials.

“It’s a direct reflection of the way the game is being refereed. The speed of the ruck ball dictates how you can play rugby – always has and always will,” he said.

Jones did, however, give credit to “absolutely outstanding” new attack coach Martin Gleeson.

“His eye for detail, his understanding of the game is first-class and him and Anthony Seibold in that attack/defence area have really made a good impression on the team and they’ll continue to add value as we go along.”

Jones, who said he had capped 23 new players this year, was also pleased with how he has deepened his squad, on the back of summer games against Canada and the United States.

“We’ve had our challenges in terms of COVID and injuries, where maybe some young guys we thought weren’t ready to play at that level of game have been given their opportunity and acquitted themselves really well,” he said.

Jones picked out hooker Nic Dolly as a great example of how quickly things can change.

“He was going back to play for Coventry, he got a call up from Leicester and played four or five games for them and finds himself in the England squad, coming up against the best pack in the world and making his debut in front of 82,000 people at Twickenham,” Jones said.

“What a story in terms of resilience, in terms of just keep doing your work and when the opportunity comes – take it.”