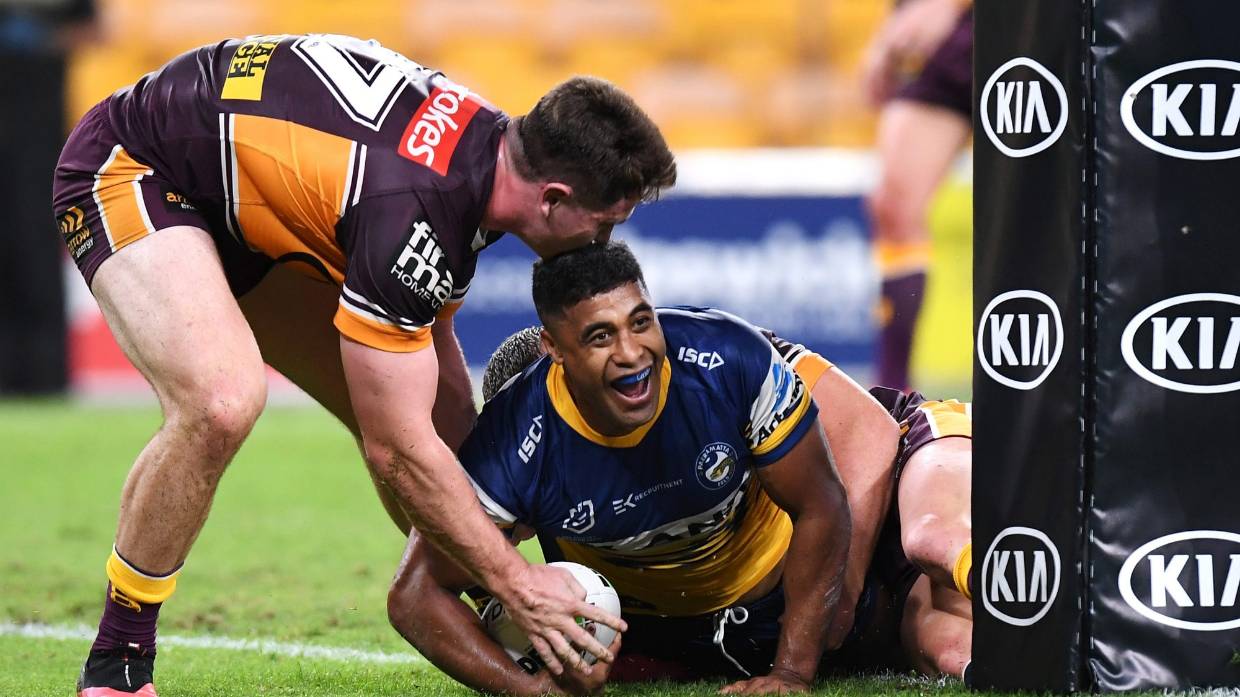 Michael Jennings of the Eels scores a try during the round three NRL match against the Broncos in Brisbane on Thursday night. Picture: STUFF SPORTS.

And on the 263rd day, Peter V’landys had finished his work, so he rested. Rugby league fans blessed May 28 and made it Holy, for the NRL had returned. Amen for that.

Suncorp Stadium was an empty church on Thursday night but the hallowed cauldron felt as if it was playing host to something of deeper significance. After the Covid-19 shutdown, sport was back in all its unpredictable, hyperbolic, uplifting, maddening splendour. It was wondrous.

The NRL had cleared every hurdle, or ploughed straight through them, to win the race to restart in Australia, not that V’landys was keeping score. Even the fake crowd noise piped through the broadcast was met with a warm reception from the game’s perennially displeased Twitterati.

And don’t forget the 300 squillion new converts overseas who tuned into a contest between Brisbane and Parramatta that was open, entertaining and ultimately, a resounding 34-6 win for the white-hot Eels, who roared away in the second half to make it three wins from three games in 2020.

There were new rules in play and they didn’t take long to be noticed. After being awarded two ‘six agains’ for Brisbane ruck infringements, the Eels pounded the Broncos’ line from the outset, doing enough damage for Marata Niukore to cross after just three minutes.

If the home side had any issue with the call, they need have only looked to Gerard Sutton, who was putting in the hard yards on his own after the NRL binned the two-referee system that had been used since 2009.

For a sport that trades on outrage around the whistleblowers, there was precious little fodder, with Sutton’s solo shift a good one, especially given the added scrutiny on the resumption match.

Whether it was the threat of being punished with another defensive set or just the pent-up energy from a few months in moth balls, the game was fast and open on the excellent surface. Brodie Croft cut his way through to scamper 50m to level the scores, before Maika Sivo nudged the Eels ahead with an acrobatic put-down in the left corner to make it 12-6 at half-time.

The Broncos lost Alex Glenn to a nasty cut and given the amount of mistakes they were starting to make, a number coming from the hands of Jamil Hopoate, his edge defence and experience was sorely missed. The Eels were dominating possession, territory, completions and soon enough, the scoreboard.

Clint Gutherson, Michael Jennings, Waqa Blake and the hugely impressive Shaun Lane crossed in the second half, while the Broncos pack was belted back to Earth, with only Payne Haas making any serious headway.

The obvious question now is how good can the Eels be in this decidedly strange season. The signs are all positive but as they saying goes, you don’t win premierships in…late May?

Outside of the contest on the field, little of Thursday night would fall into the category of a regulation night of NRL. There were no fans, that much we should all get used to, with the only faces in the crowd a few cut-outs of one of the more famous locals, Mr Fourex.

Outside of the stadium, two punters sat on camping chairs, peering out the big screen of the sparsely patronised pub over the road. One of them was wearing a Crushers jersey; hope springs eternal but even V’landys might struggle to deliver a miracle of that scale.