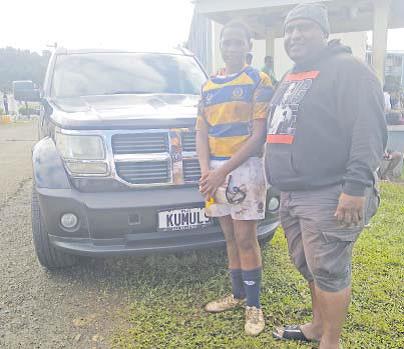 FIJI’s rugby success is gathering a lot of victories to this tiny south sea nation.

Apart from rugby scouts luring Fijian players for lucrative international contracts, those around the region are taking advantage of Fiji’s prowess.

Some are using Fijian rugby success as an investment for their future.

His son, Jayvyn is a member of the Ratu Kadavulevu under-14 team that’s playing in the Fiji Secondary Schools Rugby Union’s Eastern Zone 2019 competition.

“We are from the southern highlands of Papua New Guinea and rugby union is on the rise in our country,” Jims said after watching his son play against QVS at RKS.

“My late wife was from Ra and my son started at Veiuto Primary School in Suva. He wanted to play rugby and wanted to enrol at RKS. To me that was a good decision because I was also a former rugby union and rugby league player. Union is developing in our country.

“To me this is an investment on my son. He gets a good education at RKS and continues to develop his rugby skills and one day he might go back and help the rise of rugby in our country. He might become a national rep.

“Rekisa means ‘rise up again.’ This is his time and probably he will help improve our country one day.”

Jims studied at St Peters Lutherian College in Queensland, Australia and was a member of the PNG Presidents 13 in 2004.

“So far I have brought four PNG boys to RKS and they all play rugby, so one day they will return as qualified personnel and good rugby players to help PNG.

“Life is different at RKS,” pitched in his son.

“It’s challenging but this is where I will learn to be a man and a good rugby player. ”

“I get along well with the rest of the boys and my dream is to win the Deans Trophy.”