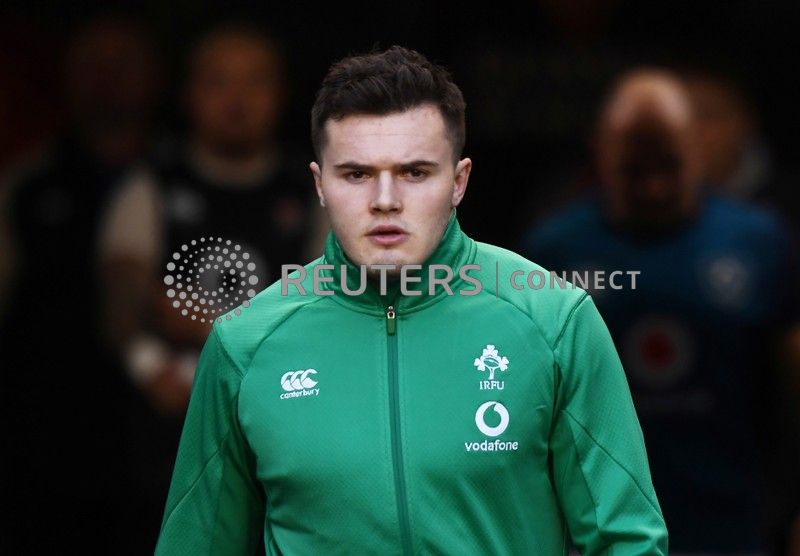 YOKOHAMA, Japan (Reuters) – Ireland winger Jacob Stockdale will miss having the experience of Keith Earls and Rob Kearney beside him in Sunday’s World Cup opener but is relishing the prospect of playing in a new look back three who love to attack.

Kearney and Earls, two of Ireland’s most senior players, ran out of time to prove their fitness ahead of the Pool A clash with Scotland, opening the door for Leinster’s Jordan Larmour at fullback and Munster’s Andrew Conway on the wing.

Both are born runners and have scored some spectacular tries for their respective provinces, potentially handing Ireland’s usually exact attacking game a more unpredictable edge.

“Obviously it’s a loss to not have Rob and Earlsy in the back three with their experience but I think Andrew Conway and Jordan have played a lot of rugby with Ireland and I’ve played a lot with them,” Stockdale told a news conference on Saturday.

“They are both really exciting players to get to play with. They’re the kind of guys that are going to want to run with the ball and attack which, as a winger, is really exciting.”

The 22-year-old Larmour burst on the scene two years ago, winning his first Irish call up while still technically a member of the Leinster youth academy having only made his debut for the province four months earlier.

While the blistering start to his Leinster career has plateaued a little, the speedy Larmour has shown flashes of his promise at international level, including a hat-trick against Italy a year ago.

Conway has taken a different path to his World Cup debut. A prodigious schoolboy talent, the 28-year-old Dubliner struggled to live up to the expectations at Leinster but a move to Munster six years ago rejuvenated his career.

He finally won his first Ireland cap in 2017 and has become a dependable and dangerous backup for coach Joe Schmidt.

With 21 caps – and an incredible 16 tries – the 23-year-old Stockdale will be the most internationally experienced of the three in Yokohama and is ready for Scotland to try and test him and his new colleagues.

“Scotland obviously have a very dangerous backline, they’ll come with a really, really intelligent kicking game too, Finn Russell likes to put in these smart kicks and cross fields that if you’re not completely switched on as a back three can hurt you,” he said.

“We’ve looked at them a lot this week and have come up with a plan to stop that.”