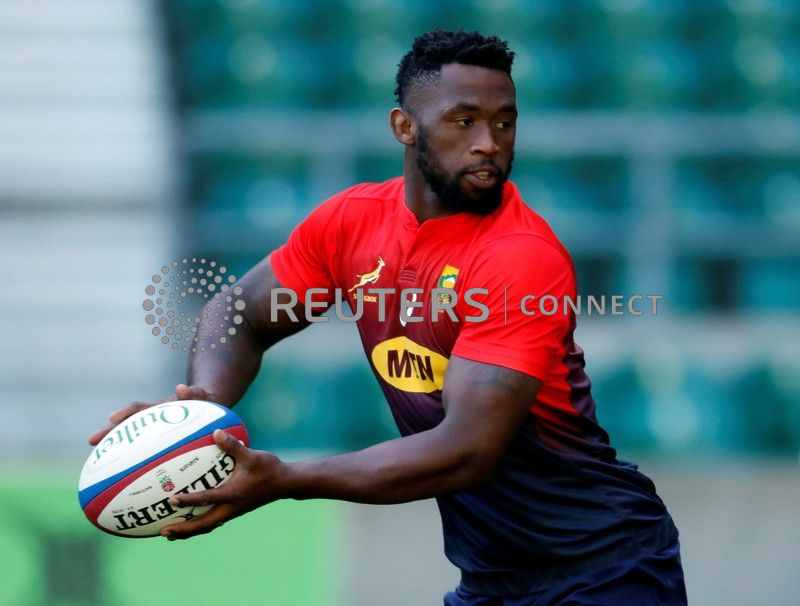 PRETORIA (Reuters) – South Africa are to take a “conservative approach” with injured captain Siya Kolisi ahead of the Rugby World Cup in Japan and may send him to play some provincial matches before he returns to the Springbok jersey.

Kolisi injured his knee playing for the Stormers in Super Rugby at the end of May and is almost certain to miss to first two of the Boks’ Rugby Championship matches, home to Australia on July 20 and away to New Zealand a week later.

“We will probably be a bit conservative with Siya to make sure he is ready for the World Cup, which is the most important part of the year,” Bok coach Rassie Erasmus told reporters on Wednesday.

“We will wait for the results of his scans on Friday, and then we will take it from there and see what the return to play protocol will be.”

Erasmus added it was likely that Kolisi would play domestic Currie Cup rugby for Western Province while the Boks are in New Zealand, with the aim to have him back for one-off home test against Argentina in Pretoria on Aug. 17.

“I think if we push him now to go with us to New Zealand, we might end up with more than a 50 percent chance that he won’t go with us to the World Cup,” Erasmus said.

Kolisi is the first black test captain for the Boks and his popularity in South Africa goes beyond the sport.

Erasmus will have to find a replacement skipper, but the names towards the top of his list – loose-forwards Warren Whiteley and Pieter-Steph du Toit, and lock Eben Etzebeth, have also been injured.

“We have a few players who need game time, who we want to consider for captaincy,” Erasmus added.

“Eben Etzebeth and Pieter-Steph du Toit haven’t played a lot lately – both need game time and might be considered for the captaincy, while we also have the likes of Duane Vermeulen, Steven Kitshoff and Malcolm Marx, all of whom have captained their respective franchise teams this season.”