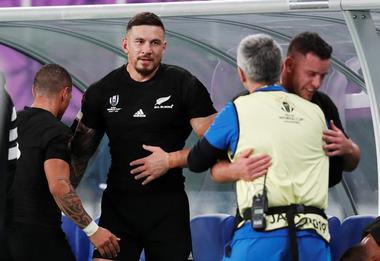 TORONTO (Reuters) – New Zealand center and twice World Cup winner Sonny Bill Williams has agreed to join the Toronto Wolfpack rugby league team ahead of their debut in England’s top-tier Super League next year, the Canadian side said on Thursday.

The move marks a fourth code switch for 34-year-old Williams, who will be formally introduced next Thursday in a news conference at the Emirates Stadium in London, the home of Premier League soccer team Arsenal.

The terms of the deal for Williams, who is of Samoan descent, were not disclosed but media reports said he had accepted a two-year, $10 million offer, which would make it the largest contract in the league’s history.

The signing is being compared to England soccer international David Beckham joining the Los Angeles Galaxy in 2007, putting a global spotlight on Major League Soccer and raising the sport’s profile in North America.

Williams, who won bronze at the Rugby World Cup last week after the All Blacks fell to England in the semi-finals, brings plenty of star power to a transatlantic team who started in the third tier of English rugby league in 2017.