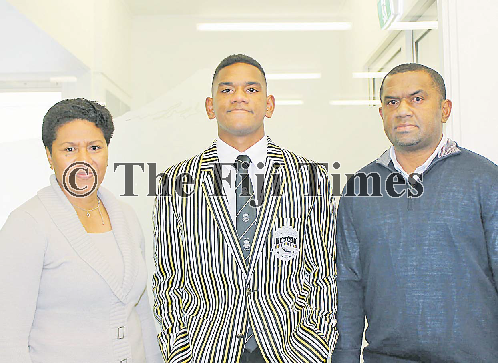 Although New Zealand Barbarians under-18 player Jone Rova is one step closer to achieving his dream of becoming an All Black, the robust centre is content on taking one day at a time towards fulfilling it.

“Every school boy who plays rugby wants to be an All Black,” Jone said.

“As for me, I’m not thinking too far ahead and I’ll take things one at a time.

The young New Plymouth Boys High School student from Vusaratu Village in Natewa, Cakaudrove, received a surprise, after he was named in the Waikato Chiefs U18 squad and New Zealand Barbarian U18 squad in the same week.

“I’m quite honoured to be named in the NZ Babarians squad, as I wasn’t expecting it.

“To be named in the Chiefs U18 squad, and then the NZ Babarians U18 within a week is quite overwhelming.

“I want to acknowledge the support from my parents who have been behind my rugby over the years, and also my coaches over the years.”

Jone’s father, Maika Rova told this newspaper that Jone’s achievement was a historical first not only for the family, but the village as well.

“No one from our family or the village has played rugby at national level before, and I’m sure Jone has his sights on wearing a national jersey one day,” Maika said.

“We were very happy to hear about his selection into the Chiefs U18 squad, and to have him named as one of 50 boys across New Zealand in the New Zealand Barbarians U18 squad was unexpected, but we were over the moon with his selection.”

With Super Rugby teams like the Chiefs and Crusaders now showing interest the Taranaki school teacher said their advice to the upcoming star had always been a simple one.

“My advice to Jone always is to have fun and enjoy his rugby while at the same paying attention to the finer details of his game, and always trying to be better, game after game.”

“I’m also a strong advocate for life after rugby.

“A lot of our players are too focused on the rugby side of things, and they forget that they actually need a career in the work force to help sustain themselves after their rugby ends.”

Jone aims to pursue a degree in criminology at the Canterbury University or Waikato University depending on where he will choose to further his rugby career.