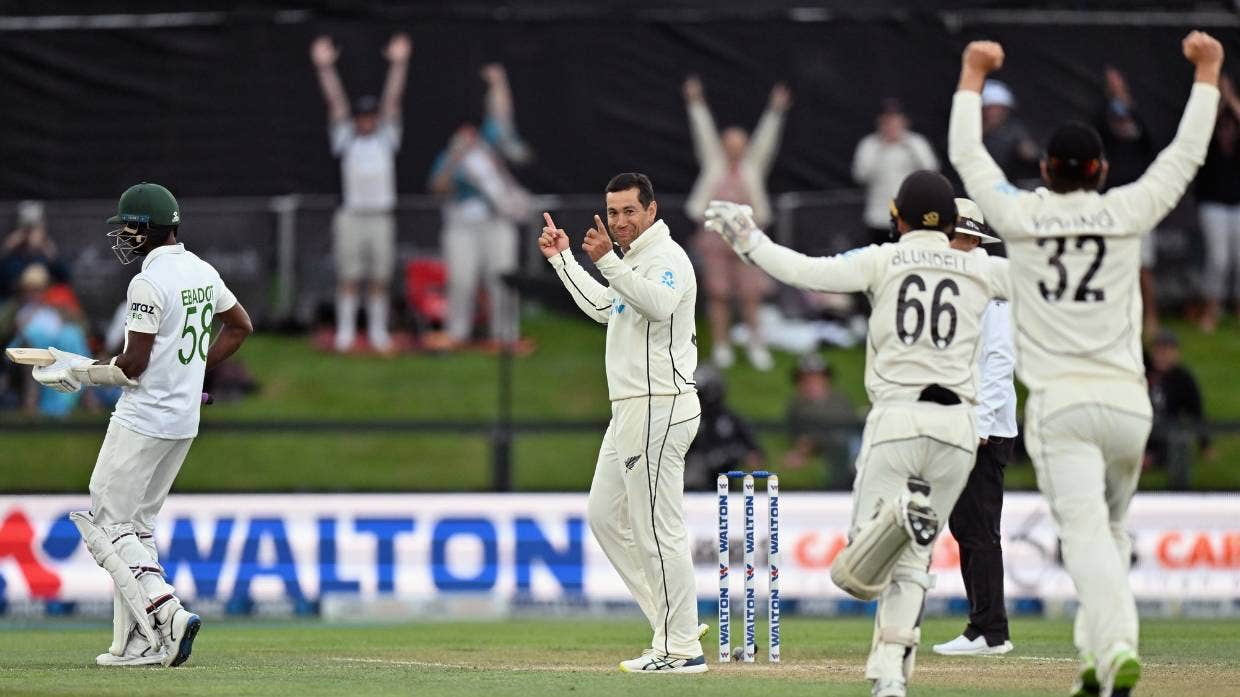 The crowd demanded it, Tom Latham allowed it, and Ross Taylor delivered.

One of New Zealand’s greatest cricketers ended his test career by taking a wicket to clinch the Black Caps’ victory over Bangladesh in the second test in Christchurch on Tuesday.

Taylor had taken just two wickets in his previous 111 tests, but was given the chance to bowl the 79th over at Hagley Oval as conditions got gloomy with the visitors nine wickets down in their second innings.

With the third ball of his over, the 37-year-old enticed tailender Ebadot Hossain into an ungainly heave and New Zealand captain Tom Latham took an excellent catch to the delight of Taylor, his team-mates and the crowd.

“I was wondering whether I had to come back and warm up tomorrow that was the main focus,” Taylor told Spark Sport about his emotions late in the day.

“Tim [Southee] kept telling me to chuck it up [when I bowled] and I chucked it up and Tom [Latham] said that was the most pressure he’s felt the whole game.

“It was an emotional game for me and my family and friends and the team-mates as well. It was good to get the win.”

With the light fading, plenty of pressure from the crowd and Black Caps’ team-mates, Latham said he had to hand Taylor the ball. Umpires Chris Gaffaney and Wayne Knights had also told him he couldn’t use pace, setting up a fairytale ending for Taylor.

“I haven’t felt that pressure from the crowd, but also the boys as well. The umpires played their part as well. It was actually very dark out there,” Latham said.

“They said we can’t bowl seamers and that led to my decision to bowl Ross and that’s the way it worked out. It couldn’t be scripted any better.”

The last time Taylor had bowled in a test match was October 2013. He bowled 99 balls in test cricket and finished with an average of 16 runs per wicket, with his best return being 2-4 in a drawn test against India in Ahmedabad in 2010.

Latham, who earlier in the day took a stunning diving grab with his left hand at second slip to dismiss opener Mohammad Naim, said the last thing he wanted to do was spill the catch and deny Taylor a memorable wicket.

“Everyone wanted me to take that catch and to grab it and sign off a test like that and for Ross to have another test wicket under his belt was pretty special.

“It’s a massive test for Ross this one and his final one. The servant he’s been for New Zealand Cricket over 17 years has been absolutely amazing and we’re looking forward to celebrating with him and his family [on Tuesday night].”

Latham made his test debut in 2014 thanks to Taylor, who missed a test against India at the Basin Reserve, where Brendon McCullum scored a New Zealand test-best 302, for the birth of his second child, son Jonty. Batting in Taylor’s No 4 spot in his first test for New Zealand was a major thrill for Latham.

Taylor had been a huge inspiration to Latham coming through the cricket ranks and said his influence on the game in New Zealand, and globally, was immense.

“The significant impact he’s had on us as a group but also New Zealand Cricket, he’s inspired generations. He’s inspired me to play cricket as someone I always looked up to when I was playing. To play cricket with him and play in his final test is pretty special.