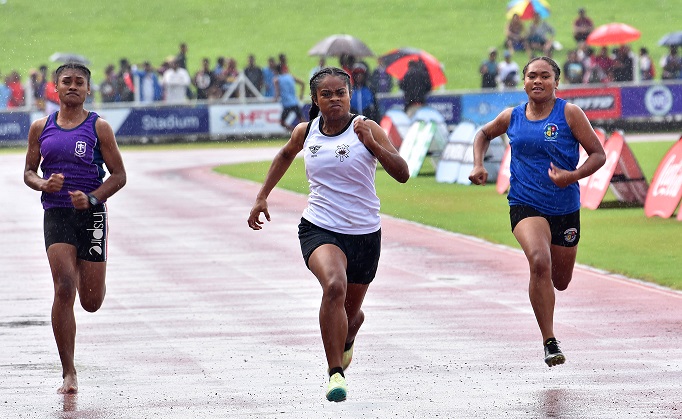 Adi Cakobau School sent out a warning shot to blue ribbon contenders at the upcoming Coca-Cola Games after they snatched the top three spots in the senior girls 100m final at the Nasinu, Nausori and Naitasiri (Triple N) Zone at the HFC Bank Stadium in Suva yesterday.

And the girl who blitzed them all, Repeka Rosi, could not hold back her tears when she crossed the finish line.

Rosi recorded a time of 12.79 seconds, Kinisalote Navula was second in 12.95s while Amele Nauluvou clocked 13.10s for third place.

It was the crowning moment after weeks of grueling training and sacrifice under the watchful eyes of coach Tony Raboiliku.

Rosi told The Fiji Times that her one wish was that her parents, who were in Vanua Levu, could be in Suva to see her win the blue ribbon.

“They have been encouraging me over the phone days before the zone, just wishing me well and to do my best,” the Year 13 student said.

She said training over the past few weeks “has been tough” but she was able to discipline herself and sacrifice a lot to achieve victory at the zone.

“I had to go on diets, there were a couple of times where I would fall sick and couldn’t train for a few days but I thank the Almighty for giving me the strength to carry on.”

ACS has consistently been one of the best performing schools at the Coca-Cola Games, and Rosi said she understands the expectation and responsibility that lays heavy on her shoulders and promised to do her best at the Fiji Finals.

“I will give my best to make the school proud but I know it will not be easy.”

She said she was expecting tough competition from other athletes from across the country at the Coca-Cola Games and was more than prepared to go “head to head” against the nation’s best. Meanwhile, ACS retained its Triple N Zone girls title with 41 gold, 25 silver and 17 bronze. Nakasi High School was crowned the new boys’ champion with 16 gold, 9 silver, and 7 bronze medals. || ACS blue ribbon || ADI Cakobau School sent out a warning shot to blue