Root digs in to give England hope 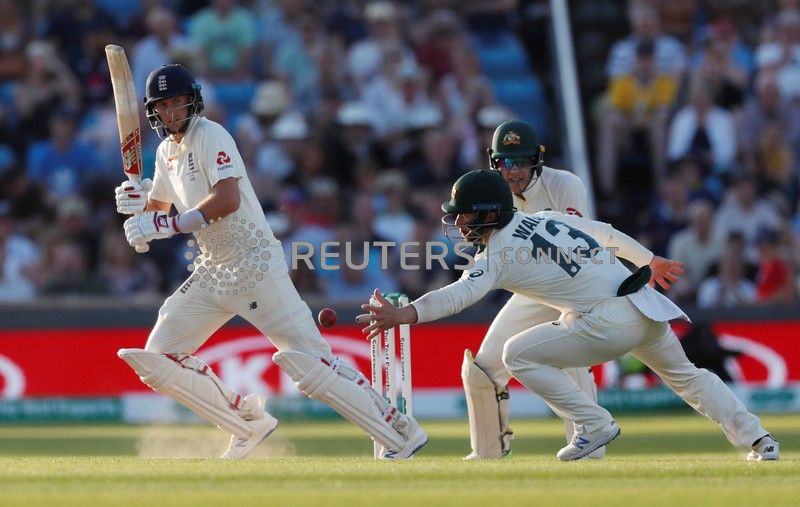 LEEDS, England (Reuters) – Captain Joe Root’s defiance gave England hope of saving the Ashes series as his unbeaten 75 helped the hosts to 156-3 in their second innings on day three of the third test at Headingley.

Australia sensed victory was in sight inside three days having set England a daunting 359 runs to win after they — 1-0 up in the five-match series and needing only one win to retain the urn — were all out for 246 in their second innings.

That meant England were set a target that, if reached, would be the second-highest run chase in test cricket at Headingley, and two quick wickets put the hosts in trouble at 15-2.

Out to avoid a third successive duck, however, Root dug in, putting on a vital 126 for the third wicket with Joe Denly (50), and the skipper was unbeaten alongside Ben Stokes (two not out) at the close with England needing 203 more runs for victory.

“With the team we have, we can win games from any position,” Denly said. “We have some dangerous players and some experienced players.

“Anytime Joe Root is scoring runs it puts belief in the side.”

England missed a few chances to make early inroads as Australia began the day on 171-6 before Jofra Archer struck to remove James Pattinson, Root taking his 100th test catch in the slips.

England continued to bowl aggressively, with Stokes enticing an edge from Pat Cummins that was caught by Rory Burns before Marnus Labuschagne’s brilliant innings of 80 came ended as he was run out.

Nathan Lyon was last out and England were soon in trouble when Burns fell in the second over after lunch for seven, David Warner taking his fifth catch of the match.

Root survived loud appeals from the second ball he faced, but settled to help England pass their paltry first-innings total of 67.

Denly looked composed as England passed 100 after tea and Root reached his 43rd test half century with a perfectly-timed cover drive.

Australia looked to have taken the key wicket of Root when he was given out lbw, but the Decision Review System showed an inside edge before it hit the pad.

Denly passed 50 from 134 balls to rapturous applause — his second test half century — to continue to frustrate the touring side.

Josh Hazlewood beat Root’s bat two balls in a row in the 58th over, with words exchanged between the two, before the fast bowler removed Denly, who got into a tangle from a short ball and lobbed a catch to wicketkeeper Tim Paine.

Root, though, proved immovable and he and Stokes will return on day four looking to push England towards an improbable win.

“Day three is probably one of the better days to bat on that wicket,” Labuschagne said. “If we show the same discipline tomorrow as we did today we will definitely reap the rewards.”

Australia would retain the Ashes with a win as England could only draw the series.