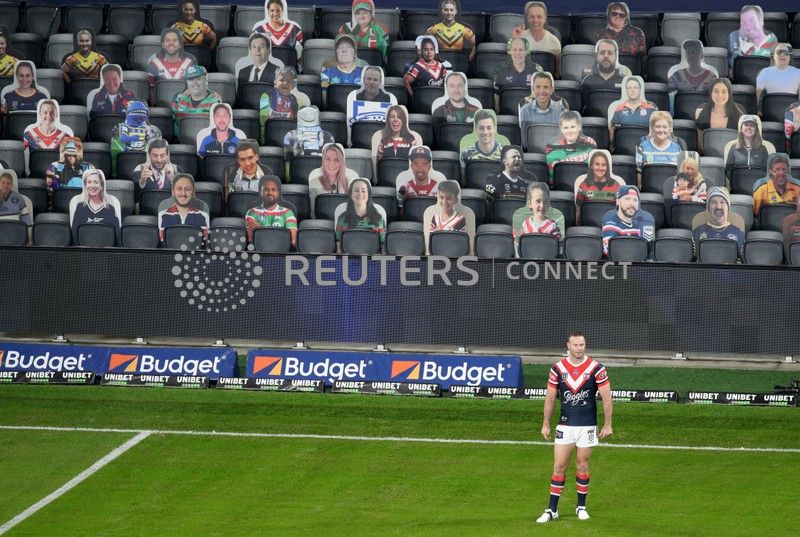 Cardboard dummies fill the stands during a National Rugby League (NRL) match without fans between the South Sydney Rabbitohs and Sydney Roosters, as the 2020 season resumes following the coronavirus disease (COVID-19) outbreak, at Bankwest Stadium in Sydney, Australia, May 29, 2020. REUTERS/Loren Elliott

SYDNEY (Reuters) – The latest instalment of the oldest and fiercest rivalry in Australian rugby league ended in a 28-12 victory for the Sydney Roosters over the South Sydney Rabbitohs on Friday but it was quite unlike any of the 246 derbies that preceded it.

The third match after the resumption of the National Rugby League (NRL) saw action return to Sydney with the Roosters, champions for the last two seasons, taking on the Rabbitohs on neutral ground in Parramatta.

Australia might have made great strides in containing the spread of COVID-19 in the nine weeks since the league was suspended but social distancing restrictions remain and the Western Sydney Stadium was empty.

The few media allowed in along with the teams and officials had their temperatures checked and were required to answer a questionnaire about their recent movements before they entered the 30,000-seat arena.

The Rabbitohs, part owned by Hollywood actor Russell Crowe, are among the most popular teams in the country but the only support visible on Friday were a few dozen cardboard cutouts that fans had paid to have propped up on empty seats.

All eyes were on Latrell Mitchell, the hugely talented indigenous back who switched between the clubs at the end of last year and was facing his former Roosters team mates for the first time.

Mitchell, great nephew of Australian tennis great Evonne Goolagong, also made a positional switch after moving to Redfern and again struggled with his positioning at fullback.

The Roosters may lack the mass support — their home in the beachside suburbs around Bondi has become the playground of the wealthy — but they have been peerless on the pitch for the last two years.

They led 12-6 at halftime on the back of two tries, the second a glorious sweeping movement finished off by young five eighth Kyle Flanagan, and ran in three more through James Tedesco, Boyd Cordner and Jake Friend after the break.

Tries from local product Cameron Murray and English prop Tom Burgess kept the Rabbitohs in the hunt but the Roosters’ defence held firm through some furious exchanges to record their first win from three matches this season.