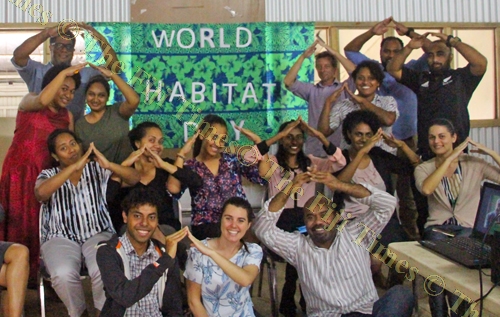 SHELTER plays a critical role in the health of individual families and the wellbeing of communities.

This was highlighted by the national director for Habitat for Humanity Fiji, Masi Latianara, during the World Habitat Day celebration on Monday.

“I am asking you to reach deep into your networks and your spheres of influence to become the hearts, hands and voices of affordable housing and sanitation,” he said.

According to Mr Latianara, youths in Asia and the Pacific play a key role in raising awareness and mobilising individuals and communities to take action on the issues around housing.

He said campaigns such as the “Habitat for Humanity Young Leaders Build” empowered young people to take the lead role in motivating their peers to build homes and communities.

“Since 2016, Habitat for Humanity Fiji has provided seed funding to 42 youth-led advocacy projects that educate and change perception and garner public support for policies and systems that enable access to decent housing and secures land tenure,” he said.

To mark World Habitat Day, Habitat for Humanity Fiji in collaboration with Communities for Communities started a housing project at Tanuya, Rewa where it hopes to achieve the goal of providing a better future through decent shelter.