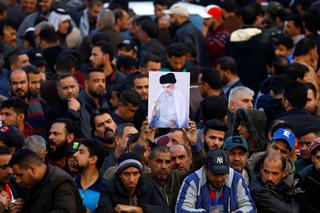 Supporters of Iraqi Shi'ite cleric Moqtada al-Sadr carry his picture near his home, after it was attacked, in the holy city of Najaf, Iraq December 7, 2019. REUTERS/Alaa al-Marjani

BAGHDAD (Reuters) – A rocket fired from a drone targeted the home of populist Iraqi cleric Moqtada al-Sadr on Saturday, lawmakers from his Saeroon party said, following one of the capital’s bloodiest nights in recent weeks. The drone attack, which caused little damage and left no casualties, followed a deadly attack by armed men near […]