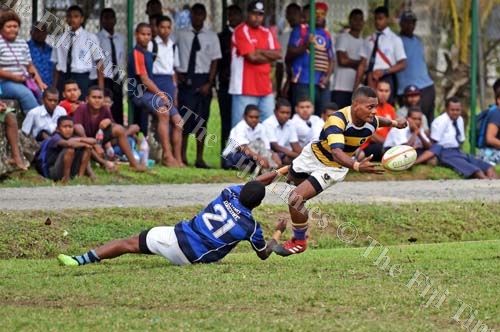 “We believe that a team with discipline can win the game and we hope that we can maintain that and improve from what we’ve shown in the game against RKS,” Lesi said.

The wind was blowing in favour of the Vulituraga boys as they led 8-7 until the dying seconds of the game where they could not hold their composure together resulting in a penalty kick which gave the defending champion of what is now known as the Powerade Fiji Secondary Schools Rugby Union Super Deans competition the unexpected win.

Lesi said their benchmark this year was to start from nothing in order to achieve something.

QVS led 3-0 at half time and scored an unconverted try in the second spell while the Lodoni lads and champion of the recent Sanix World Youth Championship in Fukuoka, Japan bagged their points in the second half with a converted try and of course the winning penalty kick.

RKS survived the encounter 10-8 to win.

Meanwhile it was a moment of celebration in the Lodoni camp as they won all their games yesterday.

Ilikimi Torosi of RKS was named the player of the U18 game.